“To do science is to search for repeated patterns, not simply to accumulate facts, and to do the science of geographical ecology is to search for patterns of plant and animal life that can be put on a map.” – Robert MacArthur, Geographical Ecology: Patterns in the Distribution of Species 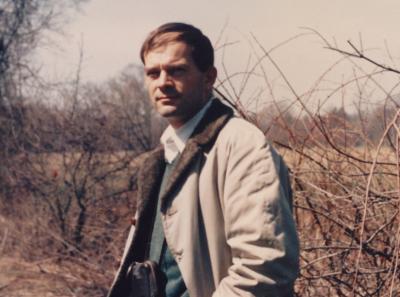 The MacArthur family’s fondness for southern Vermont began some years before Marlboro College was founded, during summers spent on nearby Newfane Hill since 1940. In 1947, Robert MacArthur saw an article that appeared in Time magazine about the new college starting up near his family’s summer home, and he liked what he read— enough to enter Marlboro with the first class that fall. What he reported in his letters home was so enticing that his family joined him the following year, his father leaving his tenured position teaching genetics at the University of Toronto and his older brother leaving his graduate program in physics at the University of Chicago. John Jr. and John Sr. thus brought Marlboro’s science program into being, and when the elder John passed away, his wife, Olive, a bacteriologist, carried on teaching biology at Marlboro until her death in 1970.

Marlboro had no science laboratories in 1947; it would not be until the next year that John Jr. set up his first lab in the “mole hole,” the cellar of Mather. But the college possessed two things the younger MacArthur brother found particularly to his liking: an excellent mathematics teacher in the person of Alan Paine, and an abundance of meadows and forests where he could do fieldwork to his heart’s content. These were the raw ingredients that he would blend innovatively and originally over the coming decades to become his life’s work, eventually making him, in the words of friend and colleague Edward O. Wilson, “one of the most important ecologists of all time.” In addition to Alan Paine, his other principal instructors would be his brother and his father, but what mattered at least as much as their presence was the fact that he could roam at will through fields and woods, honing his observation skills and thinking about what he observed. 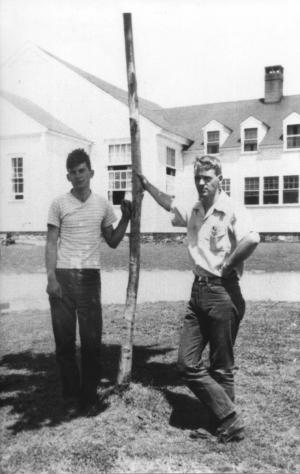 Eccentricity at Marlboro, then as now, was not only tolerated but to a degree encouraged, especially if it was exhibited within the context of the pursuit of knowledge. Robert MacArthur’s penchant for trapping small animals in the woods around the college and skinning them in his dormitory room is one such example. His two roommates in Mather, the men’s dormitory at the time, accepted this behavior more or less unconditionally at first. But one day he returned carrying by the tail a specimen of Mephitis mephitis (Latin for “noxious odor, noxious odor”), with every intention of skinning it within the close confines of the shared room. The roommates’ tolerance for eccentricity had finally reached its limit, and Robert was compelled to move his clothes, belongings, and skunk carcass to a sugar shack near where the science building now stands. There he lived contentedly for the remainder of that semester, carrying out his taxonomic studies without interference.

After graduating with highest honors in 1951, Robert earned an M.S. in mathematics from Brown University, then went on to the doctoral program in biology at Yale. His dissertation paper broke new ground in the field of for community ecology, introducing the idea of mathematical “niche apportionment models.” He showed that five different species of wood warblers, apparently occupying the same niche, actually hunted for their food in five different portions of the same tree. Building on this idea during a subsequent year at Oxford, he developed the “broken stick model,” theorizing that competing bird species were able to co-exist in a community by dividing the resources so that each used different portions of the niche, like pieces of a stick.

Robert returned to the United States to his first teaching appointment, at the University of Pennsylvania. He continued to publish papers that demonstrated his ability to interpret mathematically what he so keenly observed in the natural world, and in so doing pushed the field of ecology in new directions. One such study, published in Ecology by Robert and brother John, involved fieldwork at 13 different sites (one of which was a field abutting Marlboro College property) from Panama to Maine. To measure something they called “foliage height diversity,” they mounted a white board on a pole and held it aloft at each site. They then measured how far from a tree the board had to be, at different heights, for half of it to be obscured by vegetation. And they listened and watched for birds to determine how diverse the local bird community was.

“I was the one who would climb up the tree, because I was more comfortable with that,” said John, who retired in 1989 but continues to teach a class at Marlboro each year to this day. “Sometimes I laughed so hard I would almost fall out of the tree, watching Robert try to back through the for est with this pole high in the dense foliage.” What they discovered, by way of patient field observation, bird-listening, and the application of mathematical equations, was that bird species diversity could be predicted by the degree of foliage height diversity: from Panama to Maine, across many kinds of deciduous forests, the more foliage at different heights, the more species of birds can be found. 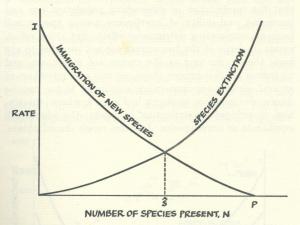 In 1965 Robert left the University of Pennsylvania to take a position at Princeton. Shortly thereafter he wrote, with Edward O. Wilson, The Theory of Island Biogeography. Its core idea was that the number of species on an island, or any isolated habitat, is determined by the balance between immigration and extinction. The increasing number of citations the book accrued each year from its publication (when it was cited five times) through 1982 (when it peaked at 161 times) is solid confirmation that MacArthur and Wilson’s theory had become, in the words of science writer David Quammen, “one of the central paradigms of ecology.” Their basic understanding of the dynamics of isolated populations continues to inform conservation science, as researchers look for ways to address the accelerating fragmentation and separation of ecosystems brought about by human activity.

In 1968 Robert was appointed Henry Fairfield Osborn Professor of Biology at Princeton. That same year he developed the “species packing” hypothesis, which argued that the number of species in a habitat is limited by the number of niches those species can potentially occupy. This suggested of course that elements of an ecosystem could be altered to attract additional desired species, a foundational premise of conservation biology today and of the movement for ecological restoration worldwide. 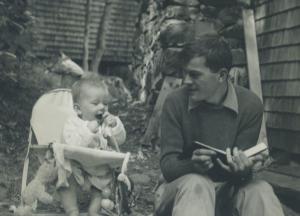 Robert’s decision to write Geographical Ecology, his final book, was spurred by the sobering news in 1971 that he had an incurable cancer. He wrote the book longhand “with no access to libraries, entirely from memory” at the family cabin on the shore of South Pond, Marlboro. He was dying, and the time remaining to collect all of his interrelated ideas under a single cover was short. Helping him were wife Betsy—who had a degree in botany—and brother John, both of whom suggested improvements to some of the chapters. Betsy typed the final manuscript. Robert called the book’s organization “phenomenological,” by which he meant that it articulated the ways in which empirical observations of phenomena are interrelated. Its prose style, as one might expect, reflects the exactitude, lucidity, and density of mathematics. The book completed, he died at the age of 42, leaving behind a remarkable legacy.

Robert once confided to Edward O. Wilson that he would “rather save an endangered habitat than create an important scientific theory.” Yet he did in fact author several important scientific theories that, since his death 40 years ago, have stood as the foundation of a profusion of research done by those who have succeeded him. This research has in turn helped preserve or restore endangered habitats in many places on the globe. 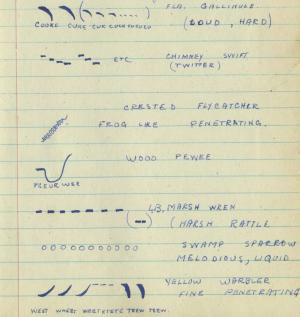 Asked once to define religion, John MacArthur responded, “The fascination with the fact that nature is so regular.” It was the regularity, or patterning, in nature that so fascinated his brother—the silhouette of foliage against a white board, for example, that coincided with the varying harmonics of birdsong heard in that same foliage. From out of this convergence of visual and aural patterns emerged other patterns that could be discerned only by a gifted mathematical imagination. Robert MacArthur saw an unmistakable beauty in patterns, both seen and imagined, over the course of his life. He said as much on the first page of his final book:

Doing science is not such a barrier to feeling or such a dehumanizing influence as is often made out. It does not take the beauty from nature. The only rules of scientific method are honest observations and accurate logic. To be great science it must also be guided by a judgment, almost an instinct, for what is worth studying. No one should feel that honesty and accuracy guided by imagination have any power to take away nature’s beauty.

One might go further to assert that in fact “doing science” actually begins with recognition of the beauty of the natural world and the embracing of it, and then asking informed and imaginative questions about what is observed. “Honesty and accuracy guided by imagination” in the pursuit of beauty is an accurate summation of Robert MacArthur’s life, a life that those of us who care about the future of the earth need to be profoundly grateful for.

Dan Toomey teaches writing and English at Landmark College, and has contributed many great articles to Potash Hill, most recently in the Winter- Spring 2007 issue. The MacArthur Prize was established in 1973 in memory of Robert MacArthur, then rededicated to his whole family for their positive impact on the science program at Marlboro College. 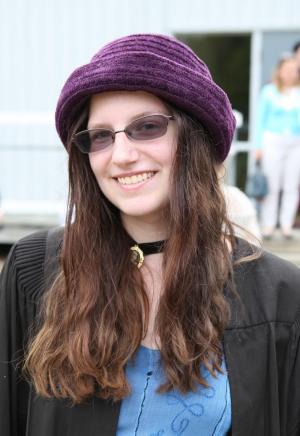 Another well-known and fairly influential scientist was Charles Darwin, who turned the Victorian world upside down with his theory of evolution by natural selection. Nikki Haug ’13 did her Plan of Concentration on the ripples of Darwin’s theory through literature, specifically the poetry of Robert Browning and Lord Alfred Tennyson. “What separated Darwin from other materialist thinkers, both before and during his time, was how much information he managed to synthesize,” said Nikki. “Darwin took what had previously been philosophical and placed it into a naturalist’s perspective, turning materialist views from opinions into facts.” She explored how Victorians, including Victorian poets, were forced to consider the idea that humanity was not distinguished from other animals and could be surpassed by a more perfect race.