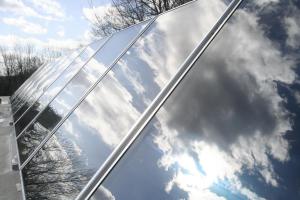 How sustainable is Marlboro College, relative to other colleges? There are several systems out there that let us try to answer that. One of the most prominent is Sierra magazine’s “Cool Schools” survey, which Marlboro has participated in for several years. Each year the Sierra Club circulates a set of questions with a focus on environmental sustainability, ranging from indoor air quality to environmental studies curriculum. Any college or university that wishes to participate can submit answers; these are then evaluated and the participants are ranked, with the 10 highest-scoring schools getting top billing.

Over the last few years, Marlboro’s ranking on the Sierra list has been as high as 34th and as low as 96th. A tool that tells us that we’re probably somewhere between average and excellent is not especially useful to us, or to prospective students who may use this as a criterion for college selection. Our practices have not changed dramatically during this time, so where does this variability come from? The issue is with Sierra’s changing methodology over time and a general bias against small schools, like Marlboro, where sustainability measures may require a more nuanced approach.

We are not the only college to have been frustrated with the cool-measuring process, and over the last few years the number of participants has been dropping. In 2010 a group of 20 or so colleges withdrew from the Sierra process entirely and put together criteria that they thought any sustainability ratings system should adhere to. These include an “open scoring process,” one where it is known in advance what points will be awarded for which behaviors, and one that “consider[s] the diversity of organizations pursuing sustainability.”

A recently developed methodology that does meet most criteria, including the two mentioned above, is the Sustainability Tracking Assessment and Rating System (STARS) developed by the Association for the Advancement of Sustainability in Higher Education. It is certainly comprehensive, with 135 questions, covering every aspect of sustainability in colleges and universities, detailed in the 300-page technical manual. Just as important, especially when it comes to small schools like Marlboro, is the recognition that different aspects of sustainability should be approached differently, depending on the context. It strikes a good balance between rigor and flexibility, kind of like Marlboro itself.

When Sierra announced that they were shifting to the STARS methodology for their 2012 survey, we were hopeful that this would benefit Marlboro, both for sharing our work in this area and as a much more useful internal tool for monitoring and encouraging change. It didn’t work out that way. Minor issues were to be expected in the first year, such as their undisclosed reweighting of the questions and an unwieldy interface that made it much more laborious to complete. But the big issue was how they decided to deal with questions that were completely inappropriate for a particular institution, such as those about the college’s research program or fast food franchises. While STARS excludes such questions for colleges like Marlboro, where these issues do not apply, Sierra inexplicably decided to count them with a score of zero in such cases.

As a result of this, the final list for the 2012 Cool Schools is dramatically skewed toward large schools that can pick up at least something in each category. Marlboro, unsurprisingly, came in near the bottom of the list, in the aforementioned 96th place.

There is no indication from Sierra that they intend to alter their approach, and as they do not reveal their scoring system in advance we cannot tell how they will be evaluating the data this year. As such, we have decided not to submit an entry for 2013.

But it’s not all bad news on the sustainability assessment front for Marlboro. As part of her Plan of Concentration work, Joy Auciello ’13 has compiled the answers to the STARS questions, a gargantuan task. She is also building a website that will let us track our sustainability work internally, using metrics that we find meaningful and that reflect Marlboro’s place in the higher education landscape.

At the time of publication, we know that we will score at least equivalent to a Silver rating in STARS, in other words, more excellent than average. This is no mean feat; the STARS standards are tough. Of the schools that have officially joined STARS, fewer than 50 have a Gold rating and none have the best-possible Platinum. For now Marlboro’s results are unofficial, but with so much work into it and such a positive outcome we will revisit joining STARS in the future. At the very least the process has served to highlight several areas to which we should pay more attention over the coming years. Our hope is to make Joy’s site accessible so that the world can see the details of our efforts and see for themselves how sustainable we are.

Matt Ollis is professor of mathematics at Marlboro and chair of the Environmental Advisory Committee. This spring he co-taught a course, with junior Daniel Kalla and admissions counselor Bill Mortimer, called Painting by Numbers: Using Data to Visualize Marlboro College.