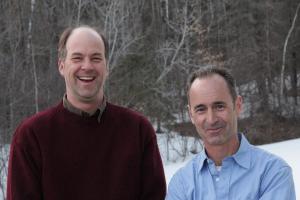 “What I’ve come to realize through the reporting that I do is just how interconnected our world has become, for better or for worse,” said National Public Radio correspondent Jason Beaubien in a Marlboro lecture last April. “And the effects of it are often not what you would expect.”

In a talk titled “On Wars, Plagues, and Disaster,” Beaubien described traveling to northern Nigeria last fall, to a cluster of tiny villages suffering from lead poisoning at unheard-of levels. More than 400 children had died, and many more were disabled by the poisonous heavy metal, as a result of local gold mining efforts using crude extraction techniques. This environmental disaster, ironically in remote villages that don’t even have electricity, was driven by global markets.

“This disaster wouldn’t have happened if the international price of gold hadn’t gone to incredibly high levels over the last decade,” said Beaubien. Although the gold deposits are marginal, and interlayered with deadly lead, they became profitable enough for miners to make 40 or 50 dollars a day. “The cost of remediation is far greater than any of the profits they have managed to reap.”

Beaubien gave several other examples of the reach of global impacts, from earthquakebroken Haiti to the scourge of tuberculosis in Moldova. Not all of these impacts are negative, as in the case of the campaign to eradicate polio. While there were once hundreds of thousands of polio victims around the world, last year there were only 223 new cases, the lowest in history.

“Polio eradication gets at the great possibilities of what humanity could accomplish around the globe,” said Beaubien.

Other speakers at Marlboro this spring included the inimitable Tim Little, retired history professor and storyteller par excellence, who spoke about the political career of Charles de Gaulle, the “Liberator of Paris.” With his usual wit and whimsy, Tim helped clarify the circumstances of de Gaulle’s rise to power and the conditions of French politics that sustained it until 1970.

Cynthia Enloe, a Clark University professor of political science, also appeared in Ragle in April, presenting a talk titled “Is allowing women soldiers to serve in combat a step toward real liberation?” The presentation traced the growth of militaristic values in the U.S., and pointed out that women serving on the front line was nothing new, much less the result of egalitarian motives.

These three lectures filled out a very full spring of events, which also included readings by renowned poets and fiction writers, dance and theater performances, and of course the regular Music for a Sunday Afternoon concerts.

For details on upcoming events, go to www.marlboro.edu/news/events.