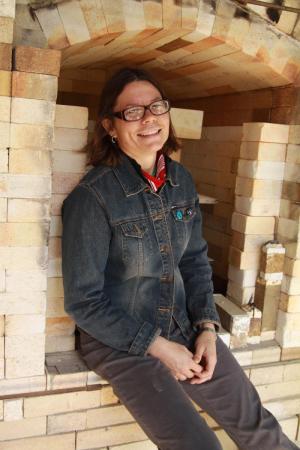 “I am on the cusp of changing my palette of glaze colors—I’m hunting for a good deep purple,” said Martina Lantin, Marlboro’s new ceramics professor. That’s not all that’s changing in the ceramics program, as Martina brings a refreshingly broad practice and perspective into the studio that fits in well with Marlboro’s visual arts program.

“In art there’s so much emphasis placed on the original idea, or the original work, that I think young people are often reluctant to look more broadly at what has come before,” said Martina. “I think it’s important to start training students to look at other work, and look at it critically: not just what this artist has done, but where their inspirations come from and whether their artist’s statement actually matches what they’ve achieved.” She knows that ceramics is about engaging one’s mind as well as one’s hands, and her classes incorporate research projects and critiques to establish each student’s own conceptual development and vocabulary.

“I see ceramics, and all art-making, as integral to a liberal arts curriculum,” said Martina. “Ceramics combines chemistry, physics and artistic expression, for example. It takes care and attention to craft, and the determination to develop skill is akin to learning the art of writing and critical thinking.”

Martina has an M.F.A. from Nova Scotia College of Art and Design University, but her knowledge of ceramics has been broadened by numerous international experiences, including an apprenticeship in England and graduate study in Denmark. She also worked as a production potter, and favorably compares the community environment at Marlboro to communal studios she has worked in. She likes that the individualized learning paradigm at Marlboro allows her to explore alongside her students.

As far as her own work, Martina draws inspiration from aspects of material culture and the story of how populations have moved around the globe through history. She has had shows across the United States and in Canada, and is represented in several galleries. In 2010 she received an artist fellowship from the Tennessee Arts Commission and was featured in the October issue of Ceramics Monthly.

“I am always striving to develop new forms in the studio, and have been fascinated with ‘flower bricks’ [vases that hold several separate stems] in the past year—they offer a unique connection to ceramic history as well as the dual potential of utilitarian and decorative functions.”

While the divide between functional and sculptural sometimes runs deep in the ceramics world, Martina is one of many modern ceramists who are challenging the centuries-old aesthetic that anything useful cannot also be beautiful. One of the things that attracted her to Marlboro was that the college was looking for a “vessel maker.” This implied a strong commitment to the craft tradition, or functional ceramics, which is uncommon in an art discipline dominated by sculptural ceramics. 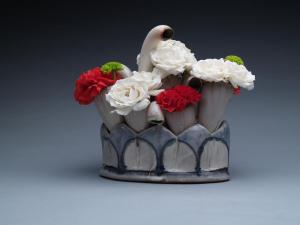 “I try to disengage from that professional debate of art versus craft,” said Martina. “In the same way that I see ceramics as just as academically rigorous as any other course here at Marlboro, I think ceramics is as aesthetically valid as any other form of visual art. It’s really exciting to know that functional ceramics is fostered and seen as being important here.”

Martina is enjoying working with the other visual arts faculty to integrate their curriculum and build on their mutual strengths, creating a diverse and dynamic program. “When I consider my colleagues Cathy Osman and Tim Segar and John Willis, I can imagine myself complementing their approach to teaching and individual aesthetics.”

To see more of Martina’s work, go to her website at www.mlceramics.com.