Plastics Can Be Good

I am the father of Anne Stein ’86, and wish to comment on the article “The Cosmopolitics of Garbage,” appearing in the Summer 2010 issue of Potash Hill. I am a retired professor of chemistry from the University of Massachusetts, Amherst, and one of the founders of its polymer program. I have been interested in the problem of plastic pollution for about 20 years and was the coordinator for the production of a documentary video “Troubled Waters,” which deals with the problem of marine pollution. I have also written an article called “Plastics Can BeGood for the Environment,” in which I contend that there are good and bad aspects of plastics and there is need to use them properly to avoid problems like the Great Pacific Garbage Patch.

Plastic bags can cause harm if they are disposed of improperly. Yet there are certainly advantages to them in that they are waterproof, lighter and have better carrying capacity than their paper replacement. While many believe that paper is less polluting, manufacturing paper bags requires more energy and water and leads to the release of toxic liquids. However, recycling plastic bags has not proved worthwhile since the value of the resulting products is not sufficient to cover the cost of collecting, cleaning and processing. Two solutions are suggested: (1) Do not give away free plastic bags at markets, but charge for them. (2) Use higher quality and thicker plastic bags that serve better for reuse. If procedures for proper use and disposal of plastics are encouraged or required, their environmental benefits outweigh their problems.
—Dick Stein, Goessmann
Professor of Chemistry, Emeritus
University of Massachusetts, Amherst

I have been meaning to write you in praise of the recent issue of Potash Hill. As usual I read the issue from cover to cover. It is rich in information. In particular the piece on Luis Batlle is well deserved—what a prince of a fellow—and the piece on the classics fellowship is splendid.... Oh, a minor point. Someone years ago got it into his head that I came in 1959, and that date has always since followed my name in Marlboro publications. I came in 1958, I think on August 1.
—Tom Ragle, former president 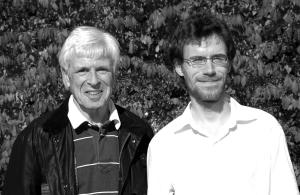 Visiting Marlboro again 42 years after teaching classics to young undergraduates (Potash Hill, Summer 2010) was a wonderfully nostalgic experience: the beautiful fall foliage, the opportunity to close the circle by meeting this year’s classics fellow; and how coincidental to come upon a soccer match against the School for International Training, with whom I too tussled as player-coach all those years ago. What an inspirational setting for higher learning.
—David Dry, classics fellow ’67–’68, shown here with Will Guast, current classics fellow.

We had several responses to the photo on page 58 in the Summer 2010 issue of Potash Hill. The identities of some of those pictured (above) are debatable, but the penchant for funky automobiles is unanimous.

Kit Barry is the one throwing the apple (you will have to ask him specifically at what); Jeff Eaton is looking on; Kendall Gifford is walking through. I do not know the name of the girl, but she was a student. The red Saab behind Kit’s throwing arm was Bob Hawthorne’s. Bob had the only “new” Saab at that time, as I remember, and it happened to be red. While there were cars on campus that needed parts, there were no parts cars, per se. Bud Gay had a Volvo, but I am not sure his is the one pictured.
—William Guy Cain ’68

The fellow throwing something is Kit Barry, and behind him with his arm raised against the sun is Jeff Eaton. I recognize the sitting woman but can’t remember her name. This would be around 1968. I think the 544 Volvo behind Kit’s hand might be mine, as I had a black one at the time, with a big white star decal on the trunk.
—Maggie Marx ’70

Thrower is Kit Barry. Behind him is Jeff “Chip” Eaton. Female’s first name I believe is Lucy (whose last name escapes me). Don’t know/remember guy in dark shirt. A bit of trivia re folks on page 46 of Winter 2010 photo: Carla Nordstrom’s father was a professor at Brooklyn College, where, before dropping out (to play music and ski-bum), I had him for introductory economics in 1964. When I came to Marlboro in ’68, Carla had already graduated, and I didn’t find out the connection until years later.
—William “Zev” Wexler ’71

That photo was probably from 1966 or maybe ’67. That might be Kit Barry doing the throwing. He had a small dirt bike that he used to noisily wind around that meadow on the left just before Moss Hollow Road dipped steeply downhill. Periodically he broke his leg doing this or other adventurous-type activities. If it is Kit, the woman is Lucy something or other, who was cheery and high-spirited and used to hang out with him. The dark-pants guy with the bulging right bicep might be Brooks Garis, because he is thinking hard and walking fast, which is what Brooks did. But wait, it looks like a cigarette pack in his shirt pocket and I don’t think Brooks smoked, so this is a low-probability guess. The only non-barefoot student, the one with the frayed cuffs—oh, he is in fact sockless, so that’s kind of in the spirit—might be Paddy Smith, who had a fabulous Morris Minor convertible that he traded in for an almost equally fabulous VW camper van. The multiple Saabs are there because that’s what ran in the snow. They were so popular that another former student, Dale Smith, was able to support himself for a while running a combination Saab engine shop and Zen bookstore in a second-floor location down in Brattleboro. They were deep and mysterious automobiles."
—Shelly Klapper ’69

People in photo are, from let to right, Kit Barry, Jeff Eaton, Lucy Jordan (sitting on rock) and Bud Symmes. Swedish cars in the photo are probably the sum total of Swedish cars on campus at that time. There were lots of other kinds of cars on campus, Corvairs, Mercedes, all mostly in various stages of age—all good as long as you could make it to Gibbsey’s or Bratt roundtrip in one piece. There was usually someone who could help to fix whatever was broken, or just turn the car upside down for a while to see if that cured the problem. Probably all the motorcycles were in the best shape of any transport options.
—Tina DuBosque ’70

The guy throwing the football (it was early fall) is named Kit. I don’t remember the name of the guy shielding his eyes. He was a friend of Eben Chesbrough’s. The girl sitting on the rock was named “Lucy.” I don’t know who the barefoot guy with the pack of smokes in his pocket was. He seems to be passing through. . . . I was from Berkshire County, Massachusetts, then and also remember the photographer, Clemens Kalischer, who was from Stockbridge.
—Paul García ’69