“When I read the dialogues of Socrates and his students, I always picture Socrates as Tim Little,” said Kathryn Maleney ’84. “We know Socrates was an open-hearted, open-minded person who remembered his debts and seemed to forgive his debtors, a person with a clear sense of himself, but who took himself lightly. And I’m sure Socrates was tall, handsome and endowed with a generosity of spirit that took pleasure in each person and their stories. This is the very picture of Tim.”

In all the years that retiring history professor Tim Little has orbited around Marlboro—starting as a student from 1962 to ’64, then as a staff member, trustee and finally faculty member—he has enjoyed the respect and admiration of those around him. When Marlboro asked him to run the admissions office in 1965—in fact he was the admissions office—Tim was the first staff member hired to do something other than support work. In addition to serving as chairman of the Admissions Committee and assisting the dean of students, he also took financial aid over from Tom Ragle, president. Tim filled out Marlboro’s first application for federal financial aid, what he calls “probably the grizzliest piece of administrative work I ever had to do,” which went into effect in 1967.

“I came back to work at the institution I had graduated from just a year earlier, so I knew virtually all the students,” said Tim. “Yet I was sort of a new entity. That is to say, I wasn’t teaching anybody anything.” 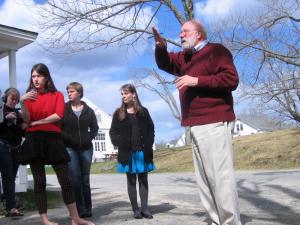 That changed for the better when Tim returned in 1974, after receiving a master’s degree from the University of Rochester. From 1969 to ’74, he had continued his connection with Marlboro on the board of trustees and was well aware that admissions efforts were struggling. Tim ran the admissions office until 1978, and then served as acting director again in the mid-1980s. He worked in admissions for a total of seven years over three decades, watching it grow from a solo act to a fully functioning office, and he set up many of the systems still in operation today. But by some miracle of cloning, Tim also began the teaching role he is known for to this day.

Tim relished the opportunity to teach with history professor Roland Boyden, his Plan sponsor and mentor in so many ways. Roland was the first faculty member ever hired and was also the first dean of the faculty. Roland’s daughter Rachel Boyden ’79 remembers Tim coming to their house in Cambridge to work on his Plan when her father was on sabbatical, in 1964. “Tim is a link to the early years of Marlboro,” she said. “It will certainly make the whole experience of history at the college different when he retires.”

“Tim offered the yang to Roland’s yin,” said Peter Mallary ’76, one of Tim’s first Plan students and father of Rebecca Mallary ’11, one of Tim’s final Plan students. “Where Roland was economical, Tim was expansive. While both were generous with their time and teaching, the first was an introvert and the second a decided extrovert. Tim has an openness—particularly with students—that is infectious. There is always a story or an observation of a curious, amusing and sometimes trenchant sort. He is a gifted raconteur.”

“Because it suited me to do it this way, and Roland did it this way, if a student came to me with an interest that was historical, I would be willing to work with that student if I could be persuaded that he or she would work hard too,” said Tim. “The fact that I knew as little about it as they did at the beginning couldn’t prevent us from getting somewhere. I’ve very seldom been let down. I’ve had some wonderful students over the years.” 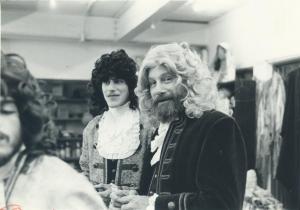 Jeff Bower ’92 credits Tim with helping him learn how to learn. “Tim is the very quintessence of Marlboro College,” he said. “Here is a man capable of sharing a great breadth and depth of knowledge within his field while at the same time allowing students to learn along their own path. He guided without boundaries, encouraged the articulation and development of ideas and presented cause and effect, while at the same time realizing that the linearity with which history is sometimes presented is never how history actually happens.”

Although Tim began in European history, his interests were continually broadened by his students’ interests and by collaborations with other faculty members. He covered Asian history with some students, Native American history with others, and “gaily danced into” lots of Anglo-American history working alongside American studies professor Dick Judd. “As it became more and more evident that history was being written and discussed on a broader and broader scope, it wasn’t so unusual that I should go into world history,” said Tim. “Everybody was doing it, and Marlboro was building up to the World Studies Program. It made sense in a way that it really didn’t before.”

“Tim gave me a new perspective on how to ‘read’ history—an important tool for critical thinking,” said trustee Sara Coffey ’90. Sara was one of the first students in the World Studies Program, and, because she started midyear, had to take the first semester of the required World History and Cultures as a tutorial with Tim. “I still see him engaging with students with the same generosity that I experienced. He has not lost that mischievous sparkle either.”

The launching of the World Studies Program had a particular sparkly significance for Tim that he didn’t know at the time, as it brought in cultural history and Eurasian studies professor Dana Howell, whom he married a few years later. “Dana and I worked well together. We taught this huge class together for World Studies, which involved grading papers and spilling all sorts of things.” 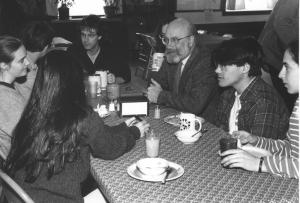 Over the years, Tim has always embodied the community spirit at Marlboro. He was a highly respected Town Meeting moderator and led a “breakfast club” chat in the dining hall every morning he was on campus. He was also a devoted emcee for the annual day-care bake sale, according to Gina DeAngelis ’94, who wrote the script for him one year.

“He was far funnier off the cuff than anything I’d written,” said Gina. “He also ended up bidding on a cake I made, and the next day in the dining hall, he came up to me in front of a dozen people and sang my praises for five solid minutes: I was definitely, he said, no matter what other things I’d ever done, going to go to heaven, solely because of that cake. I will be forever grateful to him for his gentle guidance, his warm sense of humor and his unparalleled joie de vivre.”

Now with a little more time on his hands, Tim is looking forward to being with his three grandsons and reading the “piles and piles of things” he’s collected in case he found himself retired. He is also interested in getting certified to teach children to read, and understands that there is a demand for older men in that field. “Sometimes the students get cranky with their female teachers, and an old, grim-looking man like me will give some gravity to it.”

For many years Tim has been working on writing a history of Marlboro College, and it is hard to imagine a person better equipped in aptitude and experience to do so. “The problem is that every time I sit down to write a history I end up writing a memoir,” said Tim. “And when I say, oh hell, I’ll just write a memoir to get it out of the way, the history keeps intervening again.” We await both with great anticipation.