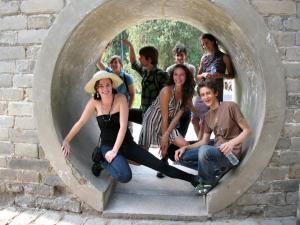 “It’s easy to forget how small the earth is when at Marlboro, where the air is clear and the trees are tall,” said writing professor Kyhl Lyndgaard. “Being in China made us aware of how pervasive human influence can be.”

Kyhl was one of seven faculty and ten students who traveled to China for three weeks last summer to explore dimensions of environmental and social issues there. This was the last in a series of fruitful visits to Asia, including China, Japan, Vietnam and Cambodia, supported by two generous grants from the Freeman Foundation. The trip followed a seminar last spring called China’s Environmental Challenges, which laid the theoretical groundwork and practical background for the visit.

“The preparatory seminar helped us calibrate our expectations, but nothing prepared me for what we saw,” said economics professor Jim Tober, who has a special interest in environmental economics and policy. “One can read about rates of growth, construction booms, consumerism and so on, and still be totally taken aback by cities of 10 million, like Harbin, that seem to be materializing before our very eyes.”

Grant Li, professor of Chinese language, and Seth Harter, professor of Asian studies and history, were instrumental in making the trip rewarding through their logistical footwork and relevant knowledge. The group arrived in Beijing, a city of 20 million, and visited many of the nearby attractions, such as the Forbidden City, the Summer Palace and the Great Wall. But they also spent time meeting with local environmental agencies, activists and researchers, from the People’s University Legal Clinic for Pollution Victims to the Zhalong Crane Nature Reserve. At Heilongjiang University, in Harbin, they were joined by eight students of English, who acted as guides and translators and gave Marlboro students the opportunity to have home visits and other outings.

A highlight for Kyhl was the chance to reconnect with Chinese colleagues he had met when they were visiting scholars at University of Nevada, Reno. The reunion prompted a lively discussion at Beijing International Studies University, one of several opportunities for Marlboro students to talk about environmental issues on campuses in China.

Jim said, “There was much disagreement among students and faculty and others we met as to whether more substantive attention to environmental degradation would follow naturally from the production of wealth in China, such that the country could ‘afford’ improvements— after all, it was suggested to us, look at the same trajectory in U.S. history—or whether the rapidity and severity of decline called for a more aggressive response.” He found the Harbin Siberian Tiger Park a particularly fascinating insight into the public consumption of conservation and endangered species protection in China. Visitors to the park ride through caged areas to view tigers, ligers and lions, and feed them live animals for an extra price. “While the nominal purpose for the breeding program might be to reintroduce tigers into the wild, there has never been a reintroduction in China and it is not even clear that there is a reintroduction plan in place.”

“Environmental studies in China is even more complex because the systems at work are different than their American counterparts,” said junior Casey Chalbeck. “For me, to even begin to understand some of the environmental issues China is faced with required a strong and critical interdisciplinary approach that took me out of my intellectual comfort zone. Being able to study alongside such a diverse group of professors and students really facilitated this for me, and because of that I feel like a better student.”