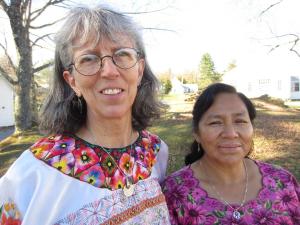 Anthropology professor Carol Hendrickson hosted a four-week visit this fall from her friend and colleague Ana Gloria Ajzac Tetzagüic, who works with women’s groups in Guatemala on a range of projects, from microfinancing to gender rights. Gloria spoke with Carol’s Food and Culture class, participated in the World Studies Colloquium, interacted with Spanish language students and enjoyed being part of campus life. Photo by Dianna Noyes 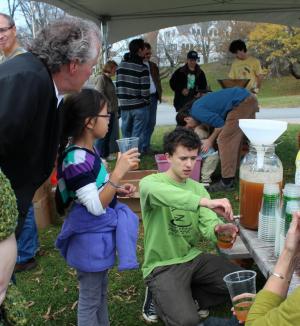 Students press fresh cider with the help of family members at Family Day in October. Other highlights were academic sessions, from “kitchen-chemistry” to dance choreography, as well as hiking, clambering up the climbing wall and dancing to live music from The Horse Flies. Photo by Elisabeth Joffe 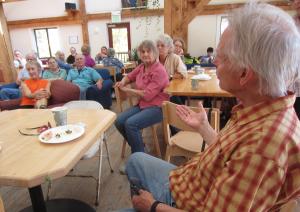 Retired biology professor Bob Engel holds forth on the intricacies of ornithology at the October “seniors’ lunch.” The monthly event invites area elders to enjoy the sunny campus center, a scrumptious lunch provided by the dining hall crew, and each other’s company. Photo by Dianna Noyes 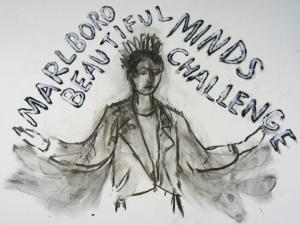 Beautiful Minds come to Marlboro: “One of Marlboro’s greatest strengths is the opportunity for students and faculty to work across disciplines and engage with meaty questions that have real-world implications,” says Ariel Brooks, director of non-degree programs at Marlboro. This was the idea behind the Beautiful Minds Challenge, a contest to attract innovative high school students from across the country. Teens were invited to create an original expression of beauty that pulled from multiple perspectives or took an innovative approach, in response to the prompt, “Make something beautiful. Say why it is.” Submissions were due in December, and 20 contestants will win a trip, expenses paid, to a student symposium at Marlboro College in February. Illustration by Raf Kelman ’09 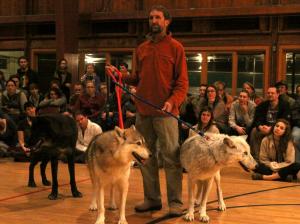 In October, Kent Webber, director of the Colorado-based Mission:Wolf sanctuary, shared three of his captive-raised ambassador wolves with an entranced crowd in Persons Auditorium. The event was hosted by Adam Katrick ’07 and biology professor Jaime Tanner. Photo by Patrick Lancaster 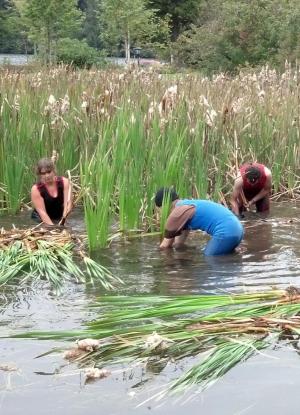 Students gather cattails for weaving and cordage as part of a forest skills workshop, a recurring event on and around campus led by juniors Mason Jones and Ariel Victor Qadesh. New students from the Bridges orientation trip titled Apocalypse Soon are frequently joined by others as they build shelters, look for edible and medicinal wild plants and learn survival skills.