Raising livestock currently takes up two-thirds of the available arable land on our planet, and this measure is rising. Professor Arnold Van Huis, a Dutch entomologist, has suggested that if we continue eating the way we do, we will soon need a whole other Earth to sustain ourselves. We don’t have one, and this is where bugs come in.

That’s right, bugs. I first learned about insect-eating, or entomophagy (en•toe•móff•a•gee), through my Plan studies in anthropology. I spent eight months in the Yucatan, trying to catch a glimpse of surviving vestiges of pre-Columbian food and medicine; one of these surviving vestiges turned out to be the consumption of insects. In fact, some researchers investigating historic cannibalism in the region argue that dietary protein was adequate with the supplementation of insects, making cannibalism more culture than craving. The idea of eating insects stuck with me, and in time I realized that entomophagy was a perfect union of so many interests I valued: culture, nutrition, ecology and having something cool to talk about at dinner parties. It was at this point that my involvement began in earnest.

When I do live presentations on the subject, I always like to begin by asking for a show of hands: Who thinks eating bugs is weird? Most of the hands go up—of course it’s weird. I then hit them with the fact that 80 percent of the world’s population eats bugs. On the pie chart of bug-eaters versus bug-snubbers, Westerners get the significantly smaller slice. Throughout Latin America, Asia and Africa particularly, bugs aren’t swatted off the menu. That makes us the minority here; we’re the weirdos. Of course, Westerners are not known for our conscientious (or even conscious) consumption of energy or other natural resources. Why would we do something so inherently eco-logical as to include the planet’s most efficient, sustainable and abundant source of animal protein in our diets? 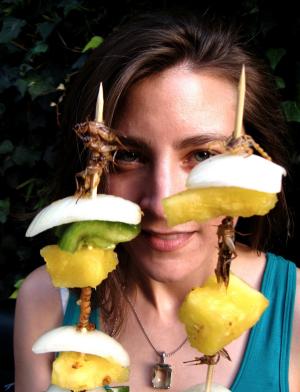 While it takes up to 10 pounds of grain to produce one pound of beef, it takes a mere two pounds of feed to produce the same pound of crickets. This cricket-fodder could easily be vegetable waste that humans would normally throw away, the by-products of other food. Although this pound of bugs may be somewhat less protein-dense than beef, it has several times the levels of iron and calcium. Bugs need less food than cows (and pigs, and chickens) because they are ectothermic: They don’t need to heat their blood in order to live. All the energy that livestock “waste” on blood-heating, bugs put straight into growing bigger, faster. Incidentally, because of this basic biological difference, insects also produce far fewer greenhouse-gas emissions.

In addition to the 10-to-1 ratio for grain, ecologist Nina Munteanu estimates that it could take nearly 900 gallons of water to produce a third of a pound of beef, or one big hamburger. Comparatively, she says, “A quarter-pound of crickets only requires a moist paper towel, refreshed weekly.” That’s a water savings of, what, over 1,000 percent?

As if that weren’t enough, let’s add a few more factors into the mix. While livestock need a large amount of space to roam around (not to mention to grow their food), insects can live quite comfortably in small spaces, which can be vertically stacked. Another advantage bugs have is rapid reproduction. Compared to a beef cow, which typically produces one calf each year, a female cricket can lay 1,500 eggs a month. It is for all these reasons that David Gracer of Small Stock Food Strategies says that when it comes to food production, “Cows and pigs are the SUVs; bugs are the bicycles.”

Our aversion to insects as food is purely cultural. Like the frog that will starve to death while surrounded by dead flies because it can’t recognize them as food, we are trapped within a matrix of perception. But, unlike the frog, our perceptions can change: The early American colonists were initially horrified by the lobsters they found washed up on the shore—these were considered famine food at best. Now they’re the most expensive thing on the menu.

The more I eat and study insects, the more I respect and admire them. I envision a future where world hunger has been solved, and where most produce is naturally organic due to the “second harvest” of insects on every crop. I mean hey, if you can’t beat ’em, eat ’em!