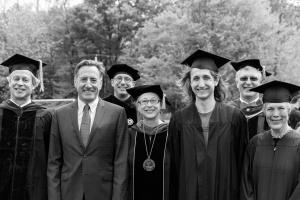 “You’re a group of students who have rejected traditional ways of knowing things,” said Vermont Governor Peter Shumlin in his commencement address on May 19. “Creative, entrepreneurial, motivated, curious—you’re critical thinkers who have said ‘yes’ to a way of learning that only Marlboro offers.” Shumlin told 59 members of the class of 2013 to look for more opportunities to say “yes,” for the betterment of their lives, their communities, and their planet. Senior speaker Evan Lamb compared college to climbing a mountain, and President Ellen McCulloch-Lovell challenged the concept of “return on investment” in higher education (see excerpt). Governor Shumlin and Julie Johnson Kidd, president of the Christian A. Johnson Endeavor Foundation, both received honorary degrees from Marlboro, and outgoing Dean of Students Ken Schneck delivered a poignant rendition of a seventh-grade poem for the valediction.

From President Ellen McCulloch-Lovell’s address
Now, orals are over, the party barge has set sail, and soon you’ll be clearing out, rolling down the hill to Brattleboro, or leaving us for graduate school, jobs, or a future still to be imagined. What to say about you as a class? Really, you are kind of elusive. Some of you are graduating after being at Marlboro two years, some for six years. You span ages 21 to 63. Two of you are veterans, part of our Marlboro tradition. I heard some of you speak up at Town Meeting, part of the ardent debates on issues from smoking to the pet policy. Maybe you are the policy debate class! 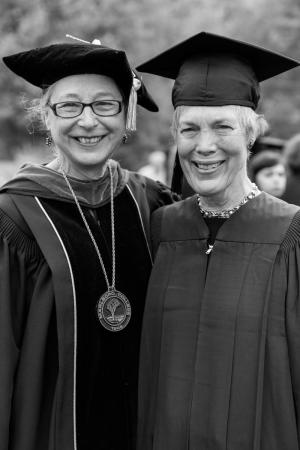 From Evan Lamb’s senior address
Right now, I’m standing at the top of my own personal mountain, and it feels like a tiny apotheosis. But the practical, survival-oriented part of my brain knows that the future looms tall in front of me, and to speak frankly, I am terrified of it. Soon I will come to the parts of the world that need fixing, and I will need to find shelter and sustenance to keep going. But I’m anything but alone. And now that I’ve proved myself to myself, now that I’m hearing “I told you so” from those people who once said “you can do it,” the next step isn’t looking so shaky, and I can turn to face the future, look back over my shoulder, and tell all of you in my best action-movie voice, “Let’s do this.”

From the honorary degree citation for Julie Johnson Kidd
You have said, “We must develop an unquenchable curiosity about the world around us, for in that curiosity we find our passions and we find new solutions to seemingly intractable problems.” In the book Declining by Degrees: Higher Education at Risk, where you submit that American higher education has lost its bearings, you say, “Pockets of excellence do exist, particularly amongst the small liberal arts colleges, where some students are transformed and broadened in thrilling ways.” We hope that some of the students you meet today, and their thrilling transformations, embolden your optimism in this regard.

From the honorary degree citation for Governor Peter Shumlin
You have said Vermont could “provide the brainpower, make the products, and seize the job opportunities a lower carbon economy requires.” You were the first sitting governor in the United States to preside over a same-sex wedding ceremony, and probably the first to be nearly mauled by bears, joking that you were within “three feet of getting ‘arrh.’” You are convinced, and have been very convincing, that Vermont can become known nationally as the “education state” in the coming years, asserting that Vermont’s education system is “the state’s greatest economic development tool.” 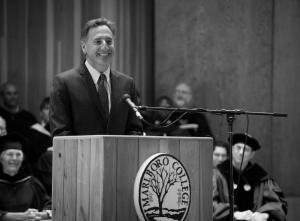 From Governor Shumlin’s address
When we landed back here in a chopper a couple years ago, the little town of Marlboro had people living in total isolation and despair because 12 inches of rain got dumped on this little community in ways that we’ve never seen before. Whether it’s Irene, or—for those of you from down country—Sandy, or any of the other climate-induced catastrophes, they’re just a little warning, a little teeny window into the future for the class of 2013’s children and grandchildren. We know we can’t move fast enough, and we’ve got to speed it up. But you all have the courage and the vision to define for us a carbon-free future, with the imagination and the power to say “yes” that Marlboro has instilled in you…. There has never been a generation of graduates who had a bigger responsibility and opportunity to say “yes” to “blessed be smallness,” by thinking small while we do big things—because the future of the planet depends on it.

Ken Schneck’s heartwarming valediction can best be appreciated on YouTube . 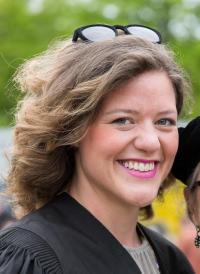 The Rebecca Willow Prize, established in 2008 in memory of Rebecca Willow, class of 1995, is awarded to a student whose presence brings personal integrity and kindness to the community and who unites an interest in human history and culture with a passion for the natural world: Evan Sachs

The Audrey Alley Gorton Award, given in memory of Audrey Gorton, Marlboro alumna and member of the faculty for 33 years, to the students who best reflect the Gorton qualities of: passion for reading, an independence of critical judgment, fastidious attention to matters of style, and a gift for intelligent conversation: Alexia Boggs, Jesse Nesser

The Hilly van Loon Prize, established by the class of 2000 in honor of Hilly van Loon, Marlboro class of 1962 and staff member for 23 years, is given to the senior who best reflects Hilly’s wisdom, compassion, community involvement, quiet dedication to the spirit of Marlboro College, joy in writing, and celebration of life: Molly Booth

The Ryan Larsen Memorial Prize was established in 2006 in memory of Ryan Jeffrey Larsen, who felt transformed by the opportunities to learn and grow within the embrace of the Marlboro College community. It is awarded annually to juniors or seniors who best reflect Ryan’s qualities of philosophical curiosity, creativity, compassion, and spiritual inquiry: Vivian Gay, Michael Schneeweis

The William Davisson Prize, created by the Town Meeting Selectboard and named in honor of Will Davisson, who served as a faculty member for 18 years and as a trustee for 22 years, is awarded to one or more students for extraordinary contributions to the Marlboro Community: Cora Lively, Elliot Samuel-Lamm

The Sally and Valerio Montanari Theater Prize is awarded annually to a graduating senior who has made the greatest overall contribution to the pursuit of excellence in theater production: Evan Lamb

The Roland W. Boyden Prize is given by the humanities faculty to students who have demonstrated excellence in the humanities. Roland Boyden was a founding faculty member of the college, acting president, dean, and trustee: Amee Latour, Mairaed Delaney, Nikki Haug 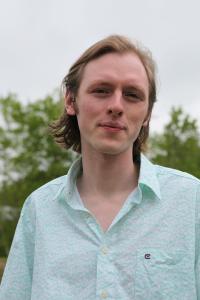 The Dr. Loren C. Bronson Award for Excellence in Classics, established by the family of Loren Bronson, class of 1973, to encourage undergraduate work in classics: Angelique Krohn

The Robert E. Engel Award, established in 2011 in honor of Bob Engel, Marlboro faculty member for 36 years, is awarded to a student who demonstrates Bob’s passion for the natural world and his keen powers of observation and inquiry as a natural historian: Eric Dennis

The Freshman/Sophomore Essay Prize, given annually for the best essay written for a Marlboro course. Liza Mitrofanova for her essay “Cancer-Curing Cankers: or, the Mysterious Life of Mycelial Growth.”

The Robert H. MacArthur Prize was established in 1973 in memory of Robert MacArthur, class of 1951, and recently rededicated to Robert and also to John and to John and Robert’s parents, John and Olive MacArthur, who founded the science program at Marlboro College. The contest for the prize is in the form of a question or challenge offered to the entire student community: first prize, Cordelia Fuller; second prize, Felix Jarrar; third prize, Tonifers (a student a cappela group), Kelsa Summer; honorable mention, Fifelo Aganga, Amber Claxton, Dane Fredericks 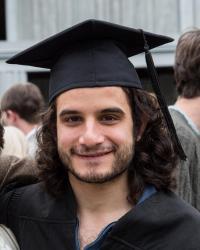 The Buck Turner Prize, awarded to students who demonstrate excellence in the natural sciences, who use interdisciplinary approaches, and who place their work in the context of larger questions: Tristan (Dirk) Stamm, Chad Daniels

For full transcripts of addresses, citations, and student Plans of Concentration, as well as photos and videos, go to Commencement 2013 on our website.