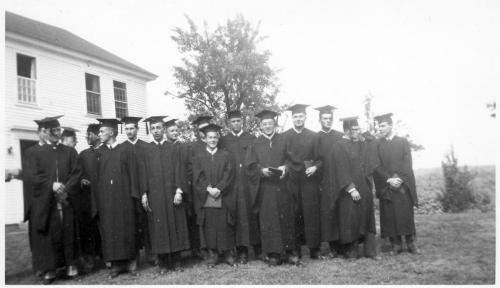 Picture Perfect Memory
I received the latest edition of Potash Hill and appreciate the updates on the growth and improvements of the college. How times change. I was most fascinated with the picture of 65 years ago (page 26) and how young many of us looked, and were. After looking closely at that fall ’47 picture I was surprised that (I think) I could remember nearly all the names of those in the picture except maybe one or two. I know some of the returning World War II veterans were older than me and I have often wondered how many of both groups still exist. I think that I was close to being the youngest in the school in that fall picture.

I enclose a picture (above) taken in front of the dorm on our graduation day in June 1951. I thought I might be able to identify everyone in the picture and remember their names once I saw them. Unfortunately, after 61 years my mind evidently is not as sharp as I thought it might be. My recollections are: (front row, from left to right) Dick Titus, Fritz Schneider, Bill Horridge, Arnie Levitt, Bob Hickey, Charles Staples, Ken Briggs (?), Bob Roth; (back row) ?, ?, ?, Bruce Weber, Luis Drake, Clayton Pratt, Dick Murray, Bob MacArthur.

I found the comparison of statistics between then and now to be quite astounding. It sure is indicative of the economic changes that have taken place over the past 65 years. I will be looking forward to the next issue of Potash Hill. I always have fond memories of Marlboro and what the college did for me when I get it in the mail.

Gameful Life
I was surprised and excited to read mention of Jane McGonigal’s book in Will Brooke-deBock’s essay “Unalienated Labor and the Gameful Life” (Summer 2012 Potash Hill). I was fortunate to meet and listen to McGonigal in person last spring at the South By Southwest Interactive Conference here in Austin. She is an energetic and caring hero and an intelligent voice about the impact of gaming in our lives. (Please don’t tell my wife I said this. We don’t even have a Wii for the kids.) Thanks Will, for your very intelligent essay.

Name Shame
To those of us who have for some time been acquainted with the gentleman shown at the left in the photograph on page 57 of the Summer 2012 Potash Hill, he has been known as “Pieter” van Loon ’88 [as opposed to Pietr]. No sweat; these things happen. Still the best damn college-produced publication, period. 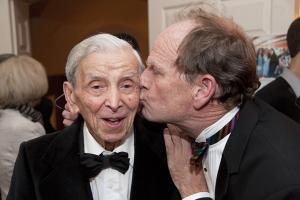 Remembering Maurice
Just saw in the latest Potash Hill the article on Maurice Pechet (page 60); didn’t realize he was a trustee at Marlboro. I photographed him last year at Harvard, where I work in the public affairs office. It’s a very touching photo that he and his wife, Kitty, liked a lot; he’s being kissed on the cheek by his fellow Lowell House tutor and artist-in-residence Livingston Taylor. Nice obit on Maurice, and the comment about his smile was right on the mark.