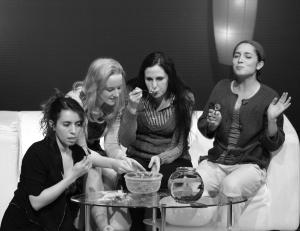 Whittemore Theater was buzzing this fall with a variety of dramatic events, both homegrown and from afar, comic and tragic. In September, for a second year, the Marlboro community welcomed Castle Theatre Company, the official theater company of University College, Durham, in the United Kingdom. The company, composed of talented students and graduates of Durham, rendered Shakespeare’s dark tragedy known as “the Scottish play.”

“Castle Theatre brought us an engaging, focused, streamlined rendition of Macbeth, featuring bold interpretive edges and lucid performances,” said Paul Nelsen, theater professor. “These British students have taken a real interest in Marlboro as well, and our hosting them gives us a chance for an invigorating exchange.”

Another highlight in September was a performance in the biennial Puppets in the Green Mountains Festival, presented by Sandglass Theater. This year’s participant was Colette Garrigan, from Normandy, France, with an imaginative shadow puppet performance of personal narrative, called Sleeping Beauty. “Puppets in the Green Mountains Festival offers students an opportunity to encounter international artists who present work outside familiar notions of conventional theater,” said Paul.

Over the course of the semester, guest director Anna Bean worked with a crew and cast of Marlboro students in an exploration of Sarah Ruhl’s contemporary play The Clean House, presented at Whittemore in November.

“The Clean House is a comedy driven by issues of class and race,” said Anna, who received her doctorate in performance studies from New York University and edited A Sourcebook on African-American Performance. She chose Ruhl’s work partly because women playwrights are typically underrepresented in both professional theater and college programs. The Clean House also challenges cultural and language barriers. “Casting a play at a small college with a mandatory requirement that two main actors speak Portuguese and Spanish was risky, but I believe the ‘risk’ was worth the result: a play that lives in several cultural worlds at the same time.”

With experience teaching at Williams College and Wesleyan University, Anna was not disappointed by the caliber of cast and crew she found at Marlboro. “Working with them all has been a true joy because I did not have to set high standards—they already have and meet them in their lives as Marlboro students,” she said. “With so many stellar students dedicated to making intellectually stimulating theater, I hope the theater program will continue to be supported in bringing guest artists and teachers to campus.”

For more information about events on campus, theatrical and otherwise, go to www.marlboro.edu/news/events.See excerpts from the October 10 piano recital by Cynthia Raim, the first in this year’s Music for a Sunday Afternoon concert series honoring retired music professor Luis Batlle, at www.youtube.com/watch?v=op24I8bs7yc. 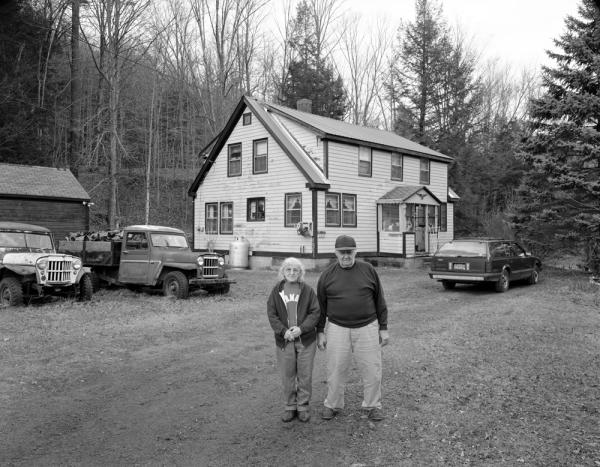 In October, an exhibit of photos by Forrest Holzapfel (son of David ’72 and Michelle ’73) and a talk by the artist highlighted the residents of Marlboro and the role of photographers in documenting local history. The traveling exhibit, called “A Deep Look at a Small Town,” was supported by the Vermont Folklife Center.