Community members from campus and beyond gathered in October for the dedication of the new greenhouse on the Marlboro campus, located across the road from Persons Auditorium. The 700-square-foot, wood-and-glass structure is the culmination of three years of planning and community labor, and stands to be the focal point for students and faculty engaged in farming, renewable resources and other aspects of sustainable living.

“Some people who have contributed to the greenhouse are interested in agriculture, while others are involved with architecture or sustainable building, so there are a lot of different motivations,” said chemistry professor Todd Smith, who has been instrumental in keeping the project moving forward. “I certainly think a lot of people support the greenhouse, and farm, as a kind of demonstration of the college community’s interest in sustainability.” 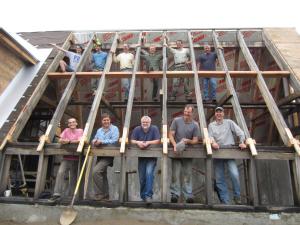 The greenhouse structure is made mostly of local or recycled materials, including local black locust and white oak timbers, pine siding and insulated glass recycled from Persons Auditorium. The design features a steep, glass roof facing south, a north wall built into the ground and a round entryway on the north side that doubles as a community meeting space.

Students have long recognized the need for a greenhouse to connect the farm to the college, as a way to extend the growing season into the fall and spring when the college is in session. There have been two other greenhouses at this same site before, student-designed hoop houses that proved insufficient to survive the Vermont winters.

After students advocated for a sturdier structure, the design for this greenhouse was devised by student Kenton Card ’10, working with fellow students, staff and faculty, as part of his final Plan of Concentration. Kenny began milling local wood for the structure and collecting stones for the foundation and retaining walls that year, and the structure has steadily grown since then with the help of other community members.

“Kenny was interested in architecture, but also in how communities use spaces,” said Todd. “So he was very interested in how the greenhouse might serve to enhance activity at the farm and bring other community members down to the farm to get involved.”

“A lot of people don’t know where the farm is. I’ve run into this pretty frequently,” said sophomore Simeon Farwell-Miller, the current farm manager. “I think that visibility has been a problem in the past, but with the construction of the greenhouse the farm will be much more apparent. And we’re planning to plant flowers and medicinal herbs and other attractive things in front of the greenhouse, which should make it even more eye-catching.” 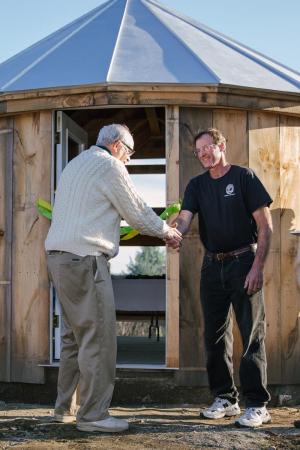 The greenhouse dedication comes at a time when awareness of local foods and other sustainable practices is growing on campus. The dining hall, under the dedicated guidance of general manager Richie Brown, is increasingly buying its raw ingredients from local or organic sources. The Environmental Quality Committee is stepping up efforts to recycle and compost, and the Food Committee is working with the community to eliminate the use of disposable cups. The farm, benefitting from its first summer with two fully paid managers, has supplied fresh food to both the coffee shop and the dining hall.

A key rationale for the greenhouse has been to draw more faculty and students to use the farm as a class resource for teaching or research. Todd Smith, for example, has based his General Chemistry Lab on the production of biofuels, growing sunflowers on the farm to collect the seeds, extract the oil and manufacture fuel. Other applications could range from growing experiments to farm poetry.

The official ribbon-cutting at the dedication was performed by Don Capponcelli, college carpenter, whose work was instrumental in the greenhouse’s completion and who has been a tireless advocate for the project. Present at the dedication were Bob Allen, president of the Windham Foundation, and neighbor David White, both of whom generously supported the greenhouse project. Other supporters, not able to be present, include Charles J. and Susan J. Snyder, Dr. Suzanne Olbricht and Jon A. Souder ’73. Kenny was enthusiastically present at the celebration via Skype from Germany, where he was attending a graduate program in architecture.