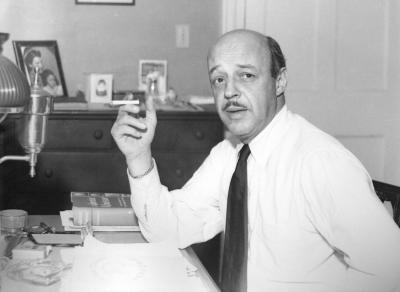 Last July, during a rare trip to Vermont, we made a special effort to visit Marlboro College, which I attended for one year in 1950. It brought back many memories of a very special year for me—the academic community where I developed a serious interest in physics, attended a wonderful creative writing course with Charlie Jackson (right), enjoyed readings by Robert Frost and Sunday concerts by the Moyse family, plus joined the team to boil sap for maple syrup.

We had a grand welcome by admissions staff, and I mentioned that I have some rare photographs from 1950, taken with my Speed Graphic camera. I’ve had several 16x20 prints made for the college: Walter Hendricks escorting Robert Frost up to the dining hall for a reading (below), Mr. Frost reading and signing autographs, a picture of the campus in 1950. Hopefully you will find these of interest.

The gentleman at the desk is Charles (Charlie) Jackson, author of The Lost Weekend and The Sunnier Side, with whom I was honored to have a creative writing course. He came to Marlboro from his home in New Hampshire for a few days each week to teach, and stayed at the inn down the road, where that picture was taken. —Al LeBeau

The college is grateful for Al’s contribution, and plans to frame some of these beautiful prints for display. Send your photos and memories to pjohansson@marlboro.edu.

New Leaf
I just received the most recent edition of Potash Hill and was astounded. Thank you so much for your contribution to the college. It was always a pleasure working with you, and it’s so nice to have the magazine that represents my college looking so sharp.
—Michelle Wruck ’05

Finally got around to looking at the Fall 2014 issue of Potash Hill. Great job as usual...nice layout, good graphics, interesting stuff. I just happened to flip open the back cover, and there was a whole page spread on one of my very favorite persons in this world: Jean Boardman. Thank you and congratulations again! I can’t say enough in praise of Jean. Our daughter learned a lot from her (and Harry, too) when she was a Marlboro student and chambermaid at the Whetstone.
—John Ludwigson, father of Elli Ludwigson ’09

Potash Hill looks so great. I think you really threaded the needle between redesign and keeping the traditionalists happy.
—Todd Smith, chemistry professor

I love the new Potash Hill look—beautiful, classy, but not glitzy. However, Laura Tucker just is not me (Alumni News, page 42). I actively use my middle name and have since I was married almost 30 years ago (egads!).
—Laura Lawson Tucker ’77

Native Son
As eldest son of Marlboro’s founder, I feel very bonded to the college and that piece of the world there on South Road. My father bought the farm when I was a few years old, and I spent every summer there until I went off to college. So, seeing the Life magazine photographer’s photo of me sitting on the stone wall in your article “Marlboro and the Vermont Way of Life” (Potash Hill, Fall 2014) brought back many memories, and I enjoyed reading it.

However, I must take exception to the opening paragraph, and in particular misleading statements such as: “The Hendrickses were neither alone nor unusual in their purchase of a Vermont summer cottage; wealthy out-of-staters snatched up hundreds of such properties in the state throughout the 1930s, as Vermont’s reputation as a vacation destination amplified.”

My parents were not “wealthy out-of-staters.” That farm was bought with a small down payment and a mortgage, which my family struggled to make payments on through the years of the Depression and only paid off at the founding of the college. My father then deeded the farm to the college, so that it would have some assets to take out a mortgage on the Cerretani farm next door (Potash Hill, Winter 2011). It was all done on the proverbial “shoestring.” 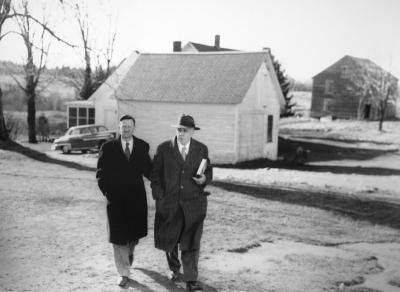 My father came from a Norwegian immigrant family. His father died when he was a young boy, and his mother brought up six sons on the west side of Chicago. My mother likewise came from a poor, southern farm family, from Virginia. My father was the only one in his family who went to college, and that was due to the support and encouragement of the person he worked for at International Harvester, as an office boy. At Amherst College he met Robert Frost, who became a lifelong friend and mentor. All of this was only possible because of hard work and the support of people who believed in him.

After my father served in the army, Frost invited him to stay at his home in Franconia, New Hampshire, an indication of the dimension of their friendship. The year I was born, 1931, my parents and sisters were staying in the Frost cottage. Soon after this, Frost left Franconia— it was becoming too much of a tourist destination—and bought a farm in South Shaftsbury, Vermont. My father followed, finding the farm in Marlboro.

During the ’30s and early ’40s my father worked with neighbors, local farmers, to keep the fields mowed, hay in the barn, and for a while cows in the pasture and barn. The local people became part of our community of friends, together with summer people like the Whittemores and Christies. Every year a large garden was planted, and my mother put up green beans, corn, tomatoes, apple sauce, etc., in Mason jars, which would be taken back to Chicago for the winter, along with apples, carrots, and potatoes. The whole family worked at all of this, and my father, returning from teaching summer school in Chicago, would right away head out to the garden to pull weeds and hoe the rows of vegetables.

What I’m saying is that with both of my parents, there was never a great amount of money, a situation that was intensified by the years of the Great Depression. But they found in Marlboro a place with great creative energy and a strong connection to the land and to the community, something that I find remains today.
—Geoffrey Hendricks 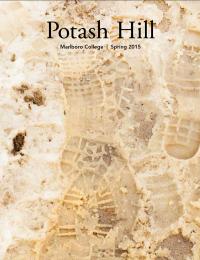