Corethia Qualls ’66
A resident of Salt Lake City, Utah, Corethia Qualls died in October. She was born in 1942, in Sparta, Tennessee, and attended the University of Arkansas as a music major before completing her undergraduate work in history at Marlboro College. Following graduation, she worked at CBS in New York City while attending graduate school at Columbia University, where she received her doctorate in the art and archeology of the ancient Near East in 1981. Corethia participated in archeological excavations in Cypress, Syria, Kuwait, and Israel, and did survey work in Syria. As a Fulbright Fellow, she directed excavations in Bahrain. She moved to Salt Lake City in 2002, where she taught theology and art history at Judge Memorial Catholic High School for 16 years. In retirement, Corethia taught classes at the Utah Ministry Formation Program of the Episcopal Diocese of Utah and the OSHER Institute at the University of Utah.

Chris Abrams FS71
Martha’s Vineyard resident Christine Hudson Abrams died peacefully in December, after a long struggle with brain cancer. She was 69. Chris was born in Queens, New York, but moved to Rockland County. She left high school when she was 16, spent time in France, came home and studied the piano intensively, and then went to Marlboro College, where she met John Abrams ’72. They married in 1969 and began a six-year, back-to-the-land odyssey, from Vermont to California, Oregon, British Columbia, back to Vermont, and finally to Martha’s Vineyard in 1975. She received her master’s in early childhood education at Wheelock College, and began a teaching career that touched the lives of countless children and families. She taught preschoolers and teachers for 30 years, and was the founding director of the Chilmark Preschool until she retired in 2010. Chris is survived by her husband John, her son Pinto and daughter Sophie Abrams Mazza, as well as grandchildren, sisters, and a brother. 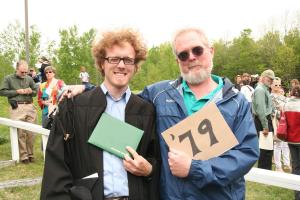 Peter Dudensing ’79
My father, Peter Dudensing, passed away at peace in his home on November 23, at age 60. He graduated from Marlboro in 1979 as a music student with a focus in composition, with a Plan of Concentration titled “Ambiguity as an Aesthetic in Music.” He also served as head selectperson during his time at Marlboro, and learned not only the craft of music, but the values of creativity, curiosity, tolerance, community, and patience. He was a music teacher for his entire professional career, and always kept these values in his heart. I am proud to say that he taught a lesson one week before he died of cancer. Our shared experience as students at Marlboro was a very special one that we both treasured; I will always be thankful that this wonderful place was a part of our lives. I hope that any old friends of my dad, or of mine, look back at Marlboro with the same fondness, and thankfulness for the many blessings we received in our time up on the hill.
Submitted by Dan Dudensing ’09, MSM ’14

Chris Mahoney ’02
A firefighter and paramedic in Marin County, California, Chris Mahoney died unexpectedly in his San Francisco home in August. A Marin County native, he grew up in Fairfax and graduated from Sir Francis Drake High School. He studied music at Marlboro with a Plan of Concentration in music composition forfilm and theater, resulting in compositions and sound design for the faculty theater production of Ulysses. As an alumnus he wrote that his favorite place on campus was the “music listening library.” Chris began his fire service career as a volunteer with the Ross Valley Fire Department after college, and was hired as a full-time firefighter and paramedic in 2005. He once told the college he had delivered a baby on a bathroom floor at four in the morning—he loved his job, and the feeling from the local community was mutual. Chris is survived by his mother and father, stepmother, sister, brother, and three nieces.

Fran Nevins, former staff member
Fran Nevins, who ran the college bookstore through the 1970s and 80s, died peacefully at Thompson House in Brattleboro, in July 2017. She was 94. Fran attended The Putney School, in nearby Putney, Vermont, where she met her future husband, John P. Nevins. She went on to attend Bennington College, majoring in literature and poetry. Fran and John married in 1947 and enjoyed a 20-year career in the Foreign Service, with assignments in Casablanca, Beirut, and Tunis. In 1967, they returned to the Nevins homestead in Marlboro. John was employed as head librarian at Marlboro  College, while Fran managed the bookstore. Over the next three decades, Fran actively engaged the community with her many talents and interests,  including the Marlboro Historical Society and choruses with Blanche Moyse and the Brattleboro  Music Center. Fran is survived by her son John L.  Nevins ’76 and daughter-in-law Cherrie Corey ’76, as well as grandchildren, a great-grandson, and nieces.

John Myer, architect
The architect of many of the campus buildings built in the 1960s and ’70s, Jack Myer died of natural causes in February 2017. He was 89 years old. Jack was a prominent Boston architect, MIT professor,  and department head of MIT’s School of Architecture and Planning from 1982 to 1987. He teamed up with Fletcher Ashley in 1960 to start and build an architectural firm, which would become Arrowstreet.  In addition to Person’s Auditorium and the original Rice Library, other acclaimed buildings created under Jack’s direction include the international award–winning Boston Architectural Center, Cambridge Friends School, and the Massachusetts State Archives Building. Retired president Tom Ragle, an Exeter Academy classmate of Jack’s, says, “If you look at their buildings in chronological order, you will find that elements introduced in the earliest buildings are all brought together in the Rice Library,  an award winner and in my opinion their masterpiece, like a cathedral on a hill.”

Dorothy Olson, friend
Wife of former trustee Paul Olson and longtime supporter, Dorothy Olson died peacefully in September in Tucson, Arizona. She was 99. Born in New York City, Dorothy graduated from Oberlin College, then worked as production supervisor for Time, Inc., and Columbia University Center for Mass Communications. In 1963 she married Paul, a Vermont lawyer, and moved to Brattleboro. Together they were deeply involved in the support of arts and education in Vermont, including the Marlboro Music School and Festival, Brattleboro Music Center, and Marlboro College, where they endowed a fund to provide educational materials to music students. Dorothy was elected to the board of the Vermont Arts Council, where she served as the first female chair. When Paul retired they moved to Tucson, where Dorothy remained active making pottery, taking courses at the university, and attending concerts. At a memorial commemoration held on December 10 in Ragle Hall, she was remembered for her curiosity, sense of humor, and capacity for friendship. Memorial gifts in her honor may be given to the Dorothy O. Olson and Paul N. Olson Music Fund at Marlboro College.

We heard the sad news of the death of Bob Engel, biology professor emeritus, as this issue of Potash Hill was in production. We will plan on a fuller In Memoriam in the next issue, and in the meantime you can refer to his online obituary. Our hearts go out to Bob’s family and deep community of friends, human and otherwise. 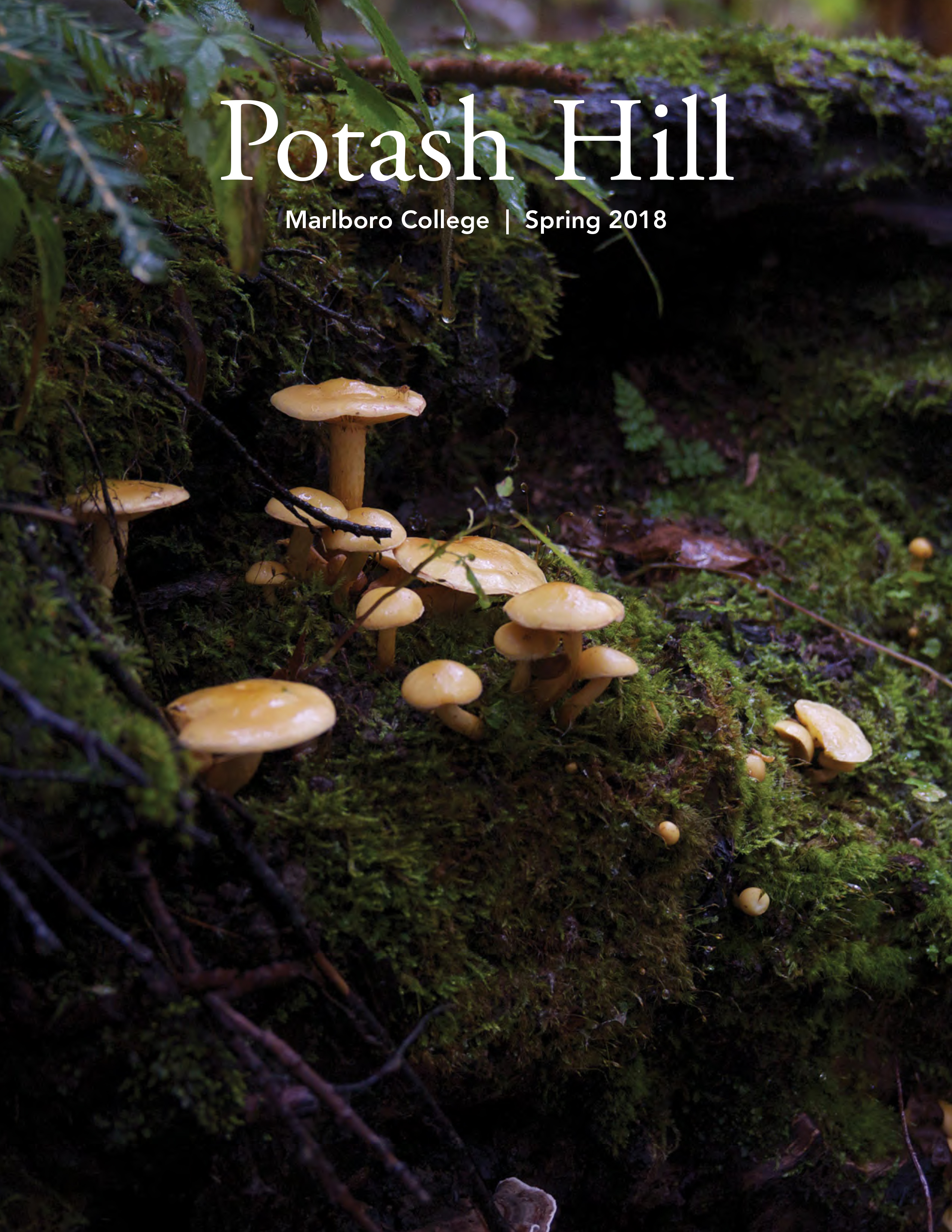