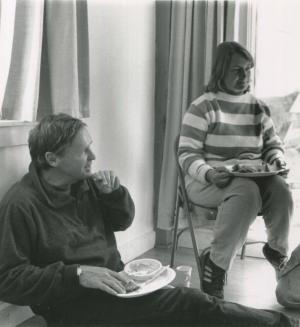 Bruce and Barbara Cole came to Marlboro as married students, and never really left. After graduating with concentrations in history and biology, respectively, they bought a house in nearby Wilmington and went on to fulfilling careers as educators. Bruce taught generations of students at Marlboro Elementary School for 28 years, while Barbara taught environmental science to kids in Wilmington. They attribute much of their experiential pedagogy to lessons first learned at Marlboro.

“I had kindergarteners through sixth graders, and it was great,” says Barbara, who first taught biology at Marlboro College in the late ’60s when founding biology teacher Olive MacArthur retired. “I got them outdoors, sifting soil, and doing all sorts of hands-on things. We did science—instead of just out of a book, I got them outdoors.”

“Although we lived in Wilmington, we were certainly involved with Marlboro, and had the same wavelength, I think you could say,” says Bruce. In addition to their teaching jobs, they also ran a summer camp for area children to learn about the outdoors. Both Bruce and Barbara worked at the college bookstore for several years, and their son Andrew graduated from Marlboro in 1997, so they have continued to be engaged with campus.

“We miss the loss of Marlboro College on the hill,” says Barbara. “Working in the bookstore and taking classes over the years kept us in close contact with great teachers, staff, and students. We attribute our joy and success to what Marlboro College gave us—you can’t replace it.”