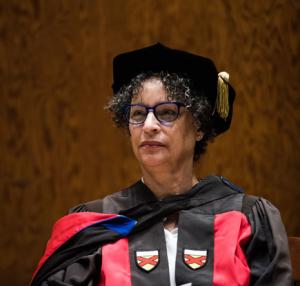 “I worry about the future of culture and the arts and the humanities,” said Gretchen Holbrook Gerzina, who received an honorary degree in 2017 at Marlboro’s 70th commencement. “As you may have heard, those things are in great jeopardy these days…There is no doubt that times have changed since I was a student at Marlboro.”

After graduating from Marlboro, with a Plan of Concentration on Dickens, Gretchen received an MA from Simmons College and a PhD from Stanford University, where her dissertation on painter Dora Carrington led to her first celebrated biography. Since then, she has shared her unique perspective on literature and biography at colleges in the US and abroad, including Dartmouth College, where she was the first African American woman to chair an Ivy League English department. Most recently she is at the University of Massachusetts–Amherst’s Commonwealth Honors College, where she is the Paul Murray Kendall Chair in Biography.

Gretchen’s latest of seven books, Mr. and Mrs. Prince, tells the remarkable story of former slaves who moved to Vermont as landowners in the 18th century. Lucy Terry (Mrs.) Prince was also the nation’s first known African American poet, and Gretchen’s scholarship about Lucy’ life was the inspiration for a mobile exhibit at the Brattleboro Literary Festival in October 2017, where she an invited speaker. A valuable trustee of Marlboro for several years, Gretchen said, “Here, students could think deeply, engage with each other and with the world, and go forth with the confidence that comes from individual achievement amidst a community of thinkers within this microcosm of the wider world.”