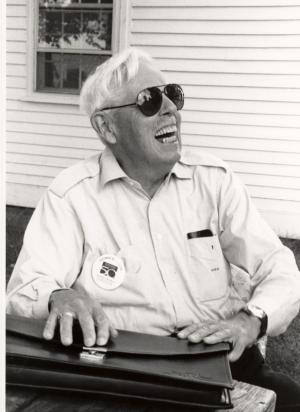 No account of Marlboro’s alumni legacy would be complete without Hugh Mulligan, the college’s first graduate, who went on to an illustrious career as a reporter for the Associated Press. “My brother said I had to start my own college in order to graduate, and that’s about how it worked out,” said Hugh in 2008, the same year he passed away.

After Marlboro, Hugh earned master’s degrees in journalism and English literature before starting a journalism career that sent him literally around the world. He visited nearly 150 countries over the years and reported on more than half a dozen wars, including a stint in the Saigon bureau during the Vietnam War. Hugh covered everyone from presidents and popes to astronauts and combat solders, all with the same wry humor and compassion.

In his colorful career, Hugh went to the North Pole in a navy blimp, toured for a week with Louis Armstrong, and went on a camel patrol with Trucial Oman Scouts. Among those he interviewed were Marilyn Monroe, Margaret Thatcher, Salvador Dali, Tennessee Williams, and Joe DiMaggio. He wrote about a Pennsylvania nudist colony, where he said the July 4 barbecue was “about the same as any other place except that people tend to stand a little further away from the fire.”

Hugh won many journalism awards and authored several books, including his 2005 memoir Been Everywhere, Got Nowhere. He was awarded an honorary Doctorate of Humane Letters from Marlboro in 1973, and remained engaged and generous with the college all his years.