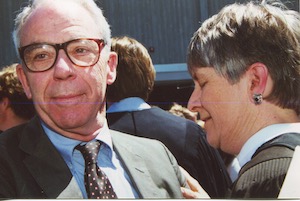 Like Bruce and Barbara Cole, Piet and Hilly van Loon have been a hard habit for Marlboro College to change. Since graduating they have given decades of their lives to the college as staff members, volunteers, and supporters, including being an enthusiastic presence at so many college events.

Piet served on the maintenance staff for several years (?), then as business manager from 1973 to 1999, “a role in which many of us encountered his stern, curmudgeonly, hilarious, warm, endearing, and always conscientious self,” says Maia Segura ’91, director of alumni engagement. Just last fall he was present at a solemn ceremony celebrating the elm tree that had graced campus for all of the college’s years, before it succumbed to Dutch elm disease. In addition to his dedication to Marlboro, Piet has been on the Town of Newfane Selectboard for many years, serving repeatedly as chairman.

Also a constant and devoted presence, Hilly held the positions of alumni director and editor of Potash Hill for ten years and director of advising from 1987 to 2000. Since then she has worked as a freelance copyeditor, sung in the Brattleboro Music Center chorus, hosted a writing group, and served as an historian for the Town of Newfane. She received an honorary degree from Marlboro in 2000, and the graduating class established a prize in her honor, “given to the senior who best reflects Hilly’s wisdom, compassion, community involvement, quiet dedication to the spirit of Marlboro College, joy in writing, and celebration of life.”