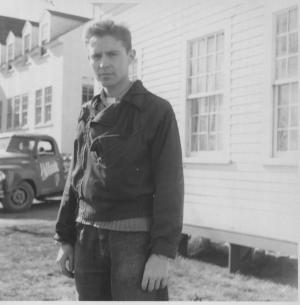 One of the pioneering first students of Marlboro College, Richard Liversage died in February at the age of 95. Richard was born and grew up in Fitchburg, Massachusetts, and served in the Air Force stationed in Hethel, England, before coming to Marlboro. “People at Marlboro were very fine; I made a good choice,” said Richard, who studied biology and chemistry with John MacArthur, Sr., and roomed with renowned ecologist Robert MacArthur. He got a master’s at Amherst College and his doctorate at Princeton University before immigrating to Canada in 1961 to continue his work on amphibian limb regeneration at the University of Toronto. He taught some undergraduate courses in his first years there, but by the time he was a full professor he was primarily doing research and advising graduate students, many of whom were co-authors of his more than 80 published papers. Although he officially retired in 1991 after 44 years, a period of incredible growth in the biological sciences, Richard continued writing research papers and staying in touch with research colleagues. He is survived by his wife of 65 years June Patricia, children John, Robert, James, and Ross, and six grandchildren. 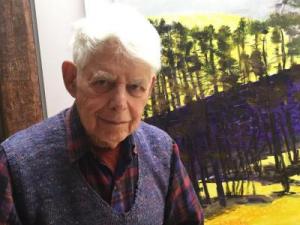 Renowned painter and longtime trustee, friend, and supporter of Marlboro College Wolf Kahn died in March, at the age of 92. After emigrating from Germany to the United States in 1940, Wolf graduated from New York City’s High School of Music and Art and served in the Navy during World War II. Then he began studying with renowned painter Hans Hofmann before completing his bachelor’s degree at the University of Chicago. Wolf traveled extensively, painting landscapes in Egypt, Greece, Hawaii, Italy, Kenya, Maine, Mexico, and New Mexico. Although he lived in New York he spent summers and autumns on a hillside farm near Marlboro on Stark Road, and it is his vibrant Vermont landscapes for which he is most known. Over the many years of his association with Marlboro College, Wolf served on an academic advisory board, as an outside examiner for art students, and starting in 2006 as a trustee. In 1992 he endowed a visual arts scholarship at the college, and in 2004 he generously provided funding to complete the welding shed and equip the sculpture studio. At last year’s commencement, both Wolf and his lifelong partner Emily received honorary degrees for their commitment to the ideals of Marlboro College.