Text and Photographs by Seth Harter

In the spring of 2017, Asian studies and history professor Seth Harter and Salvatore Annunziato ’18 traveled for two weeks in Japan, exploring the history and contemporary expression of craft through carpentry, toolmaking, and ceramics. They found the century-old folk art movement known as mingei to be still alive but challenged by the forces of industrialization and fine arts. 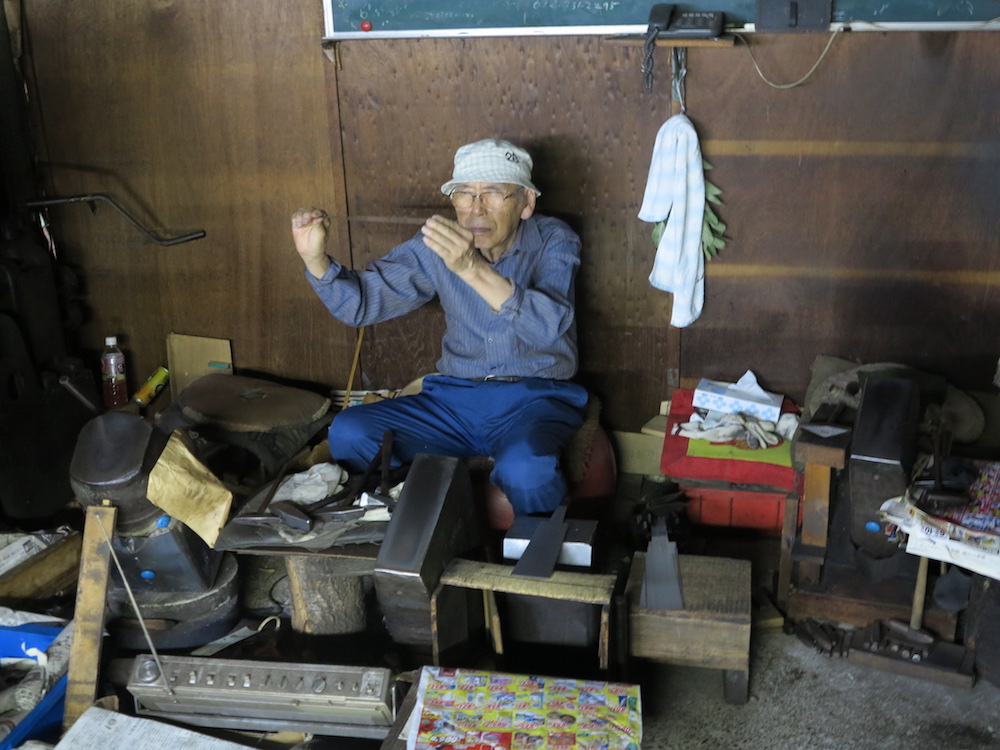 “Tingk, Tingk, Tingk”—a hammer meets anvil with just a sliver of spring steel between them. The most senior shokunin (craftsman) at the Hishika Saw Factory in Miki City, Japan, works in a windowless room. Seated on a low bench, he faces a wide mirror and a fluorescent tube light, both propped on the floor. Tea thermos, boombox, and sweat rag are all within easy reach.

He taps a blade, holds it up to the mirror and light, checks it for distortion, and taps again. The blade found its way here after being cut on a fully automated toothing machine and briefly polished on a grinder. Once the perfectly balanced blade leaves the shokunin’s hands, a pair of much younger workers—who also field phone calls and receive visitors—will insert it into a cedar handle and wrap it with rattan cord. They’ll oil the blade, sheath it in protective paper, and box it for shipping. The shokunin does not sign his work, does not embellish the blade, does not reject the mechanization of earlier steps of the production process, does not rush, does not slack, does not chat with visitors. His touch is the secret sauce, the inimitable and indispensable step that allows blades as thin as 1/100th of an inch to slice straight through wood rather than veer off plumb or buckle and break. His work is mingei.

During my visit to Japan with senior Salvatore Annunziato, our fieldwork built on a year’s worth of tutorial reading in the realm of Japanese aesthetics, centering on Yanagi Sōetsu’s provocative essays defining and promoting mingei, published in English under the title The Unknown Craftsman. Drawing on the work of the British artists and social critics William Morris and John Ruskin, Yanagi decried the toll industrialization was taking on handicrafts in Japan. In 1926, he joined forces with potters Bernard Leach, Hamada Shoji, and Kawai Kanjirō, who together coined the term mingei for the folk art ideal they wished to promote. Over the next decade, these artists establish both a magazine and a museum in Tokyo dedicated to the promotion of works they thought embodied this ideal.

In Yanagi’s view, the highest expression of beauty rests not in fine art, but in the humble, utilitarian objects made by anonymous craftsmen. The best of these works honor the nature of their raw materials in a fashion only possible when a skilled and sensitive hand responds to natural irregularities. Industrial products were soulless, homogenous, aesthetically dead, Yanagi claimed, while fine art tried too hard. In its quest for beauty, fine art became ensnared in self-consciousness, theory, and the expression of ego. Borrowing from Buddhism, Yanagi championed a nondual aesthetic: an organic beauty unconstrained by formal principles of beauty and ugliness. The mingei craftsman dwells in a state of mushin (no-mind), emboldened by the inherited power of tradition yet free to create new forms.

In the century since Yanagi first began to develop his aesthetic principles, industrialization in Japan has, of course, proceeded unchecked, and fine art of the Western, nonfunctional, conceptual variety has also flourished. One might expect that Yanagi’s craftsman would have little room left to maneuver. Salvatore and I went to Japan to consider in what ways Yanagi’s aesthetic continues to be relevant. 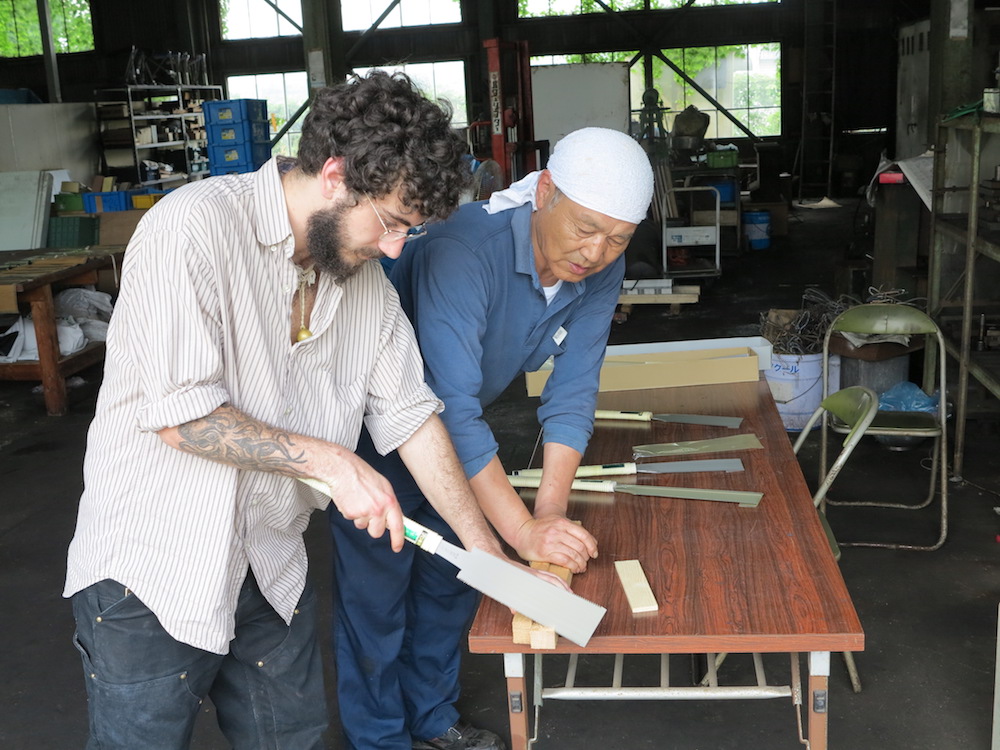 We found ceramist Kawai Kanjirō’s house on a quiet lane in the bustling Higashiyama district of Kyoto. Along with other pottery pilgrims, we came to gape at the scale of his eight-chamber noborigama (climbing kiln) and the unmistakable elegance of his ceramic work. While touring the grounds, however, we also learned about his disposition as a shokunin. During the war years, too old to serve in the army and unable to procure enough wood to fire his massive kiln, Kawai built furniture synthesizing Japanese and Micronesian traditions, and wrote essays exploring his indebtedness both to prior generations of craftsmen and to contemporary colleagues, critics, and consumers. His writings were later published under the title We Do Not Work Alone. Following Yanagi’s principles, Kawai refused to sign his work and initially declined his designation by the Japanese government as a Living National Treasure, a post-war system of recognition and support meant to enhance the status of crafts in the country. Rejecting this security, he drove himself to ever-greater levels of production and to an ever-expanding aesthetic vocabulary.

While Kawai’s legacy is borne mostly in the clay, fellow ceramist and Yanagi associate Hamada Shoji’s impact has been much broader. In 1925, when Hamada moved to the town of Mashiko, a few hours north of Tokyo, its small scale ceramics production was overshadowed by the older kiln sites in central Japan. Today the town is home to more than 300 ceramic artists, and smoke from the wood-fired kilns wreaths the surrounding hills. Hamada’s influence is everywhere: in his Reference Collection housed on the site of his former studio; in the provincial ceramics museum; in the larger galleries that feature, usually alone in Lucite cases, original Hamada pots; and in the ubiquitous glazing patterns he made famous—sugarcane stalks, abstract swirls, combed lines—decorating the work of his successors.

Craft is unquestionably alive and well in Mashiko. While there, Salvatore and I stayed at Furuki, home to the Mashiko Ceramics Arts Club. Three generations of the proprietor’s family spilled in and out of the compound, overseeing the firing of a collection of work made by a group of local retirees, training two American apprentices, providing studio space to neighboring amateurs, and teaching classes to student groups from Tokyo. But when I imagine Yanagi walking through Mashiko today, I picture him scowling. Mashiko is, from a mingei perspective, a victim of Hamada’s success.

The best contemporary potters in Mashiko, like Ken Matsuzaki, regularly exhibit their works in the top galleries of London and New York. Hamada originals are more likely to be found under the watchful eye of a museum guard or shop proprietor than filled with tea, perched on the edge of a workbench. Japan’s prosperity and love of ceramic arts have meant that Mashiko potters can make a good living, but they do so as individuals, as artists who sign their work, who promote distinct aesthetic brands. They’re a far cry from Yanagi’s innocent 16th-century farmer whose rice bowls were perfect for being untainted by too much aesthetic theory.

That pottery should have become more art than craft is perhaps, to a Western audience, no surprise. When we ventured to the Takenaka Carpentry Tools Museum in Kobe, however, we discovered that wood plane making, too, had undergone this dubious elevation. On approaching the serene villa housing the museum, perfectly adzed cypress doors parted noiselessly before us. An exhibit dedicated to the development of woodworking tools in Japan pays homage to the skills and travails of unknown craftsmen, but the culmination of the exhibit is a section called “Exquisite Works of Master Craftsmen,” where individual blades with poetic names bathe in spotlit glory. These tools may once have been used to build temple roofs and kitchen hearths, but now the grime of the whetstone and the oil of the shokunin’s fingers have been wiped from them and they have become fetishized examples of abstract beauty. The names of the foremost blade forgers are not only known and displayed, but are used almost like imperial reign titles to orient the viewer chronologically: such-and-such a blade is from the Chiyozuru Korehide era. In the next room, a model teahouse and a shoji (sliding lattice door) likewise showed us how utilitarian objects can, with sufficient skill, patience, and money, transcend the everyday and provoke in the viewer a distancing awe.

Back in neighboring Miki City, where we first met the saw factory shokunin, the president of the Tsunesaburo Plane Blade Company had other things to worry about. Uozumi Akio’s three sons had all rejected the chance to follow in their father’s footsteps. The market in Japan for traditional hand tools was contracting, and tool makers of Miki City were concerned that their best days might be behind them. Retooling, so to speak, would not be easy. The city’s fortunes were established in the 16th century when the ruler of the region, Nagaharu Bessho, surrendered to the unifier Hideyoshi Toyotomi. In exchange for Bessho’s head, Hideyoshi relocated to Miki a group of talented blacksmiths (prisoners of war from his campaigns in Korea) and granted tax remissions for local industry. Miki’s fame and fortune as Hardware City was insured for 400 years, but what lies ahead for this craft-driven industry?

Seated in an office stacked with whetstones, blades, orders, and invoices, Uozumi told us that future prosperity depended on extending the market for his wares overseas. He and his workers would have to be sensitive both to the characteristics of their metal—a mix of Hitachi blue paper steel and iron salvaged from 19th-century railroads and shipping enterprises—but also to the changing demands of their customers. In this disposition, the president of a major tool manufacturer showed how few steps removed he was from the thinking of a shokunin. Tsuensaburo Plane Blade Company would survive by producing planes that were beautiful, not to look at in a gallery but to pull across a plank of cedar. I could see Yanagi smiling.

Seth Harter is professor of Asian studies and history. He recently studied temple architecture and joinery in Kyoto and Nara, and apprenticed with renowned chair-maker Tak Yoshino in Kawaguchiko, Japan, during his spring 2018 sabbatical. His visit to Japan with Salvatore was made possible by support from an Aron Grant and the Endeavor Foundation. 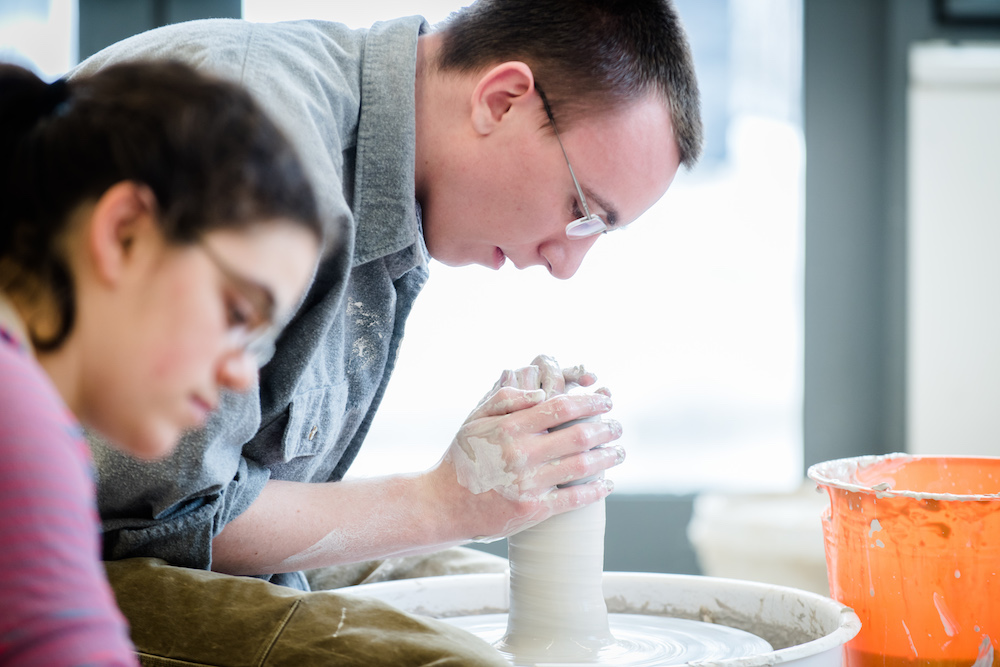 Seth’s deep exploration of Asian craft traditions have inspired more than one visual arts student. “The mingei movement, a counter-industrial craft movement in the 1920s and ’30s, is interesting to me,” says senior Henry Robinson, who studies ceramics and drawing at Marlboro. “It’s about bringing ceramics and art to a wider audience through skills and traditions.” The utilitarian approach to craft appeals to Henry, who can usually be found in the ceramics studio perfecting his skills. “I don’t want to just emulate this movement but instead make something that’s a little more personal to me that can also be useful—not these high-art objects. It would be one thing to bring art to a lot of people, but it’s another to create things that are really interesting.” Learn more about Henry. 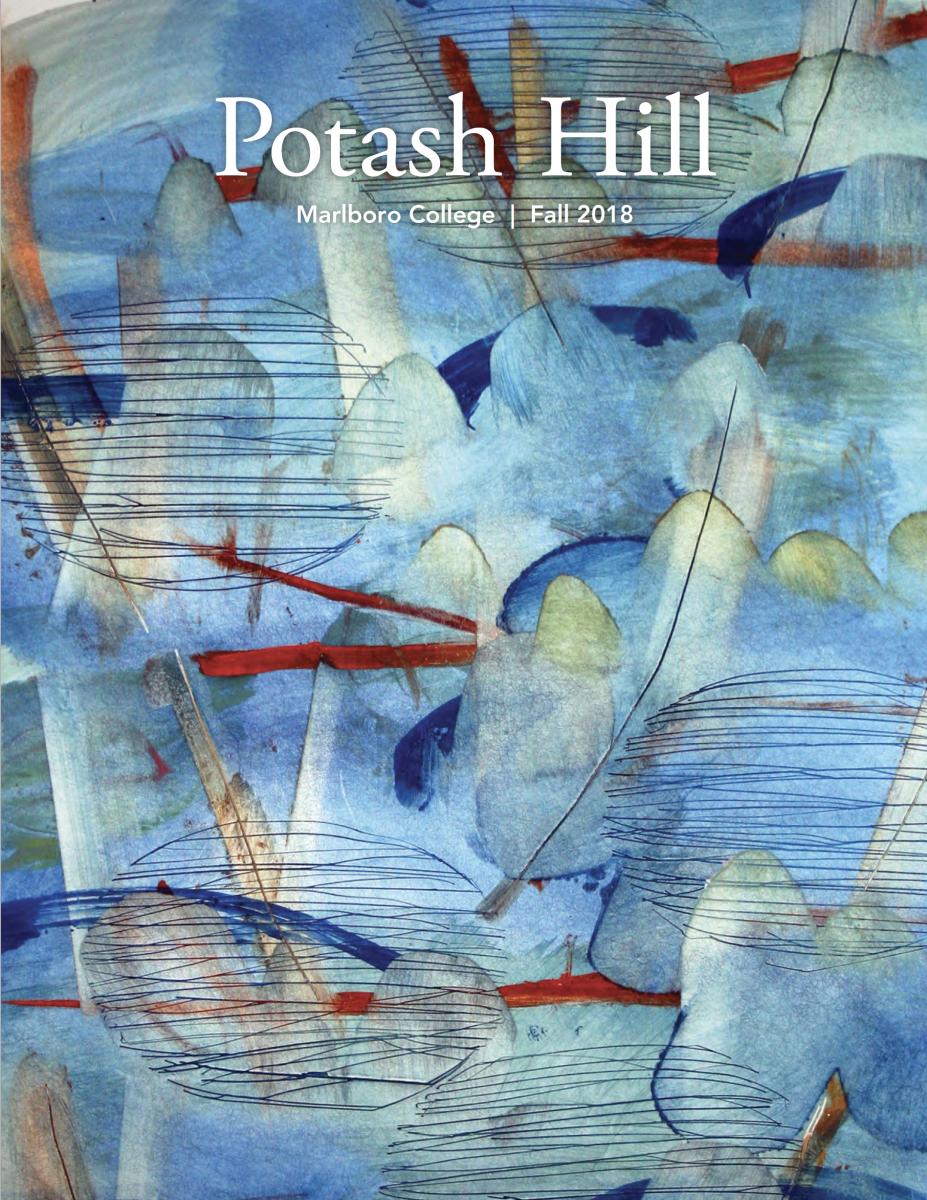